My Favourite Supplement Ever

...is Renegade Crowns: A Guide to the Border Princes, by Black Industries, for Warhammer Fantasy Roleplay 2nd Edition. 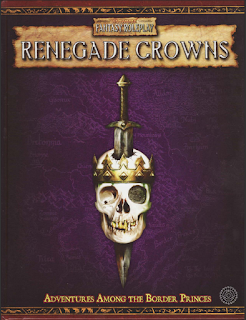 The thing about Renegade Crowns is, it's not what you think. Normally books detailing a certain area of a campaign-setting follow a staid, trite, and rather bland formula: lists of settlements, adventuring locations, important NPCs, with a few sample adventures at the back. Snore. And all the WFRP setting supplements tended to go down that route, basically constituting detailed but rather by-the-numbers gazeteers of various regions of the Warhammer world.

Renegade Crowns is something different, though, because with this book the designers chose to create what can only be described as a random sandbox generator: a big set of tables for drawing up a map; populating it with settlements, rulers, wandering monsters, adventuring locations and lairs; creating a several-thousand-year history for the area; and planting the roots of conflict with various subplots to give the whole thing flesh. It really is a tour de force - that rare supplement that doesn't just give you something to play out of the box, but which gives you the tools to do something original of your own. The difference between Renegade Crowns and, say, the Forgotten Realms, is rather like that old adage about giving a man a fish so he has fish for a day versus giving him a man a net so he can have fish whenever he wants.

And it's not just a nice idea. As a random sandbox generator it works exceptionally well, striking the balance between giving you enough detail to mould your creativity while being abstract enough not to act as too much of a constraint. For instance, if you randomly generate an ancient ruin, there are tables to generate the Ruins Type (e.g. dwarf, chaos cult, or recent human), the Ancient Menace inhabiting it (e.g. a daemon, an undead being, or a degenerate tribe), the Original Purpose (for instance a temple, a tomb, or an outpost), the Age (from dozens of years to thousands of years old), the Reason (for example, abandonment because of famine, war or resource loss), and a means to link it with other ruins (if you get two Arabyan ruins around the same area and of around the same age, for instance, it might mean that during that era an Arabyan sultan ruled the region).

And that's just one example. There are random tables to generate regional leaders and their conflicts, relationships and secrets, for creating settlements and "oddities", for special geographical features, for economic resources... Anything that you need to create a sandbox and make it tick.

The greatest achievement of Renegade Crowns, I think, is that it manages to ooze flavour at the same time as avoiding providing any real setting detail. It precisely captures the mood of the Border Princes, as a chaotic, sparsely settled Wild West full of rogues, adventure and wealth, with nary a map or an NPC in sight. What the designers have done, in other words, is to give the reader a way to create a Border Princes of their own, rather than foist a Border Princes on them.

Imagine if all campaign settings books were like that: giving you a way to create your own Forgotten Realms, your own Athas, your own Mystara, rather than only providing the officially-sanctioned version the designers themselves created. Imagine if all writers took the attitude that their own special-snowflake campaign ought not to be canonical but merely inspirational. Imagine if designers tried to give you useful stuff rather than pretty stuff. Imagine if they weren't all wannabe novelists. Imagine there's no heaven. It's easy if you try.
Posted by noisms at 04:27

Email ThisBlogThis!Share to TwitterShare to FacebookShare to Pinterest
Labels: wfrp