In these literal and figurative dark times, what we need is the light of Our Lady of Dungeons & Dragons to shine forth upon us. In that vein, I'd like to run a campaign of D&D online, Wednesday lunchtimes, 12-2pm UK time. It will be a weekly game, probably starting next week (the 20th) or, failing that, the week after.
I would like to run a megadungeon inside a giant tree, which I am currently mapping and keying.
If you are interested, contact me at noismsgames AT protonmail.com. You get special priority if you were in my Cruth Lowlands game from days of yore (you know who you are; I've lost everybody's email addresses).
Posted by noisms at 00:40 5 comments:

Megadungeons on A1 Scrolls

Yesterday, I discovered that my stationery cupboard at work has a huge stash of A1 notepads. Of course, work stationery exists only to be pilfered, so I will help myself to one sooner or later, but a great idea (great to me, at any rate) popped into my head as well the moment I saw them: megadungeons on A1 scrolls.

I have experimented in the past with mapping dungeons on A3 paper because it allows you to easily include both map and key on the same page (the latter either situated in a box in a corner or as notes within/next to rooms), with space to breathe, cutting out the need to flip between pages or files. How much truer would this be of A1 paper? Especially if the whole thing (or at least an entire, sprawling level) could be made to fit on one sheet. If so, it would be a simple matter to carry round a megadungeon rolled up in a tube, whether as one sheet or several. Pop a sheet of house rules in with them, and you're ready to go. The advantage of the scroll is also that one does not need to unwind the whole thing - just the cross section where the action is happening.

I would much prefer to run a dungeon from a scroll than from a book, if only for the vibe, man.

I went with the family to visit my aged mother over Christmas. Having finished all the books I'd brought with me earlier than I expected, I was at a loss for bed-time reading, so I rooted through the shelves and discovered this old 1970s edition of The Hobbit: 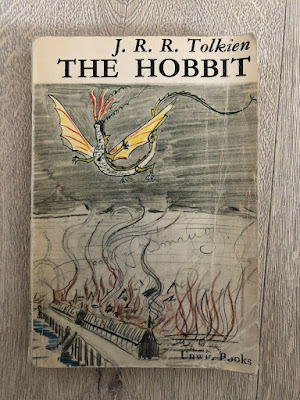 You have to love that old school cover.

I probably last read The Hobbit about 7 or 8 years ago - enough time to forget lots of little details. As these came back to me, it gave me cause to reflect on the evolution of the fantasy genre; a lot of Tolkien's ideas have been picked up and run away with during the course of the last 50-70 years, but there are a number which simply haven't. Indeed, as you read The Hobbit now, you encounter many little throwaway lines that have had almost no impact on the development of the fantasy genre and which, if they had, may have altered its flavour considerably. For example:

Wicked dwarves allied with goblins. For some reason dwarves being the enemies of orcs and goblins has become a trope, but here on p. 58 of my edition we find: "[Goblins] did not hate dwarves especially, no more than they hated everyone and everything, and particularly the orderly and prosperous; in some parts wicked dwarves had even made alliances with them." Although there are shades of Warhammer chaos dwarves and their alliance with hobgoblins, here.

Weapons which gain power when a particular foe is around. We're used to depictions of elvish weapons glowing to reveal the presence of orcs, and we're also used to weapons which eat souls or gain power from shedding blood, or whatever. But Glamdring gets sharper just because goblins are nearby. From p. 60 - "It burned with a rage that made it gleam if goblins were about; now it was bright as blue flame for delight in the killing of the great lord of the cave. It made no trouble whatever of cutting through the goblin-chains and setting all the prisoners free as quickly as possible."

Gollum wears trousers. Okay, so not exactly a trope, but I think everybody now has the image of Peter Jackson's Gollum in their heads when they now imagine the character. But he originally had pockets, and thus surely trousers. From p. 73 - "[Gollum] thought of all the things he kept in his own pockets: fish-bones, goblins' teeth, wet shells, a bit of bat-wing..."

Giants. Even Tolkien himself seemed to forget that there were giants in Middle Earth once - they don't appear in The Lord of the Rings or The Silmarillion unless I am horribly mistaken. But they're there in The Hobbit. On p. 88 - "'I must see if I can't find a more or less decent giant to block it up again,' said Gandalf [referring to a mountain pass through which goblins are coming], 'or soon there will be no getting over the mountains at all.'" They appear to be good giants as well.

Animal Fantasy. On p. 115 - "Inside the hall it was now quite dark. Beorn clapped his hands, and in trotted four beautiful white ponies and several large long-bodied grey dogs. Beorn said something to them in a queer language like animal noises turned into talk. They went out again and soon came back carrying torches in their mouths, which they lit at the fire and stuck in low brackets on the pillars of the hall around the central hearth. The dogs could stand on their hind legs when they wished, and carry things with their fore-feet." Later there are sheep serving dinner and ponies helping set the table.

Talking giant spiders. We're all used to giant spiders, but Tolkien's talk. Not for him the boring concept of 'Animal (1)' intelligence.  On p. 145 - "[T]hen in the silence and stillness of the wood he realised that these loathsome creatures were speaking one to another. Their voices were a sort of thin creaking and hissing, but he could make out many of the words that they said. They were talking about the dwarves! 'It was a sharp struggle, but worth it,' said one. 'What nasty thick skins they have to be sure, but I'll wager there is good juice inside.'

Elves who like a piss-up. On p. 164 - "Then Bilbo heard the king's butler bidding the chief of the guards good night. 'Now come with me,' he said, 'and taste the new wine that has just come in. I shall be hard at work tonight clearing the cellars of the empty wood, so let us have a drink first to help the labour.'" They end up getting shitfaced and blacking out. These are not your father's elves, are they?

The tone of The Hobbit is different because it's for children, of course, but also because Tolkien's ideas clearly developed a lot in between its publication and writing The Fellowship of the Ring. Who knows what would have emerged if The Lord of the Rings had never been written and The Hobbit had remained the genre's ur-text?

An Old Friend for a New Year

This year, I intend to do some real work on the Fixed World. Probably released via a Patreon (or similar) model, with each release being a segment of the map, pre-written content, and tables for generating more - enough so that you could easily run an entire campaign with the material provided in each one.

Here is a work in progress world map, at a 50-mile per hex scale. Not finished, because as if the whole idea wasn't absurdly ambitious enough, I want ultimately to try to detail the seas and oceans as well. I also need to fiddle around with the position of things and add pack ice and so on - and, more importantly, the 'time zones'. 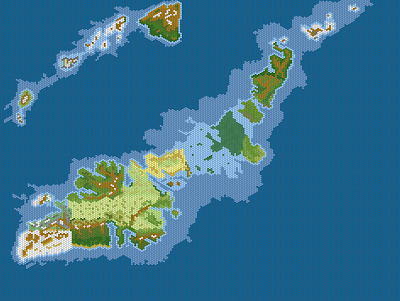