Dreaming is Free: Towards an 'In Search of the Blue Wizards' Campaign 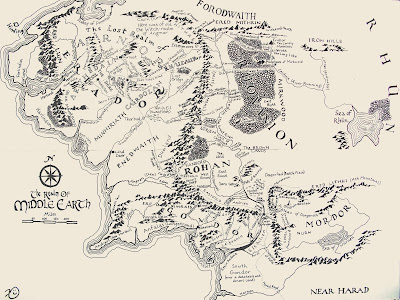 Is it possible to look at the map above and not feel a wave of nostalgia washing over you like a tsunami?

Anyway. The Blue Wizards. Tolkien had different conceptions of them through his career. The version I prefer is from his letter of 14th October 1958 to Rhona Beare:

I really do not know anything clearly about the other two [wizards] – since they do not concern the history of the N[orth].W[est]. I think they went as emissaries to distant regions, East and South, far out of Númenórean range: missionaries to 'enemy-occupied' lands, as it were. What success they had I do not know; but I fear that they failed, as Saruman did, though doubtless in different ways; and I suspect they were founders or beginners of secret cults and 'magic' traditions that outlasted the fall of Sauron.


There is so much in that small paragraph: distant regions, vagueness about success or failure, how the wizards might have failed in 'different ways' to Saruman, what secret cults or magical traditions they founded and more besides. Plenty for a DM to get his teeth into, anyway.

I imagine the campaign covering the area beyond Mirkwood, encompassing the Iron Hills, the Sea of Rhun, and Rhun itself - and beyond. Ostensibly, the PCs would be going in search of the Blue Wizards, perhaps under the command or instigation of Gandalf or Elrond, but there would of course be much more to the campaign than this. There would be Easterling tribes of myriad types, some nomadic, some living in walled towns. There would be degenerate Numenoreans, perhaps something like the black Numenoreans of the South - the remnants of colonies from the Second Age - or undead ones (or only the ruins of the civilization they built). There would be agents of both Saruman and Sauron going hither and thither across the land, trying to thwart the PCs and find the Blue Wizards for themselves. There would be roving orcs and other of Morgoth's creations. But there would be elves and dwarves too, perhaps of unusual Avari types in respect of the elves, and perhaps of a more primal or wild nature in the case of the dwarves. And, naturally, there would be these "secret cults and 'magic' traditions" that Tolkien so tantalises us with.

The campaign would be a sandbox, but one which I think of as a purposive hexcrawl. There would be clues scattered across the map as to the Blue Wizards' whereabouts. But many of these would have to be red herrings or diversions, and of course the PCs might well be distracted by other things too, not the least of which being rival groups of Saruman and Sauron's servants. Crucial in all of this would be to start the PCs off already having several avenues to explore, and taking things from there - giving them options, and then seeing what pre-arranged clues are subsequently uncovered.
Posted by noisms at 03:35