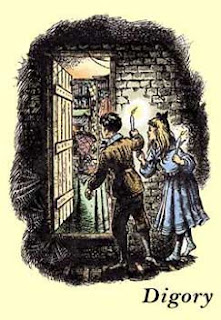 For a while now, Beedo has been posting about what he calls plot hooks in the sandbox (see also here), the idea being that in a sandbox it's sometimes best to start the players off with some sort of information - rumours, maps, what-have-you - to give them something to go on, rather than just telling them "okay, you're in a tavern, get on with it". There's a lot more to it than that, but I'm sure you get the idea.

Anyway, his new idea for how to implement this is just great, and has to be shared:

It's the mid 17th century.  The infamous witch hunter Luis Diaz de la Torre is dead, but his notes describe the existence of secret cults, blasphemous books, evil artifacts, and crazed wizards, working dire magic in remote places.  What will you do with the information contained in the dead priest's library?

The idea here is that at the beginning of the campaign, one of the characters, or perhaps a patron, inherits the library of this priest who was once part of the Inquisition.  In an alternate version of earth, those investigators carrying out the Inquisition do indeed come across evidence of sorcery and dark practices.  The characters inheriting the dead priest's library would come into possession of dozens of potential plot hooks right at the beginning of the campaign, and many of them could be local, allowing the group to plan their own expeditions and test the veracity of the priest's scrawls right away:

I fear the Bishop of Zaragoza is secretly a vampire - why does he shun the daylight?
Must investigate the coastal village of Braga - rumors of sea devils and gold trinkets from Atlantis.
They live beneath the streets of Cordoba, and they eat the corpses of the dead.  I will not go back down there.


Cool or what? It got me thinking about another potential "wide area sandbox" scenario that I've been entertaining for a while: The Magician's Nephew, shorn of its other elements. The idea is that one of the characters inherits his/her uncle's study; and contained therein is a gateway to a multiverse, together with the uncle's notes on what is contained therein.

What I really like about this sort of thing is the thought that you can also introduce some other standard elements of D&D in an organic way. Why does the magic-user in the party have a spell-book? He found it on a shelf. You can also do something I've always wanted to do in a D&D game, which is to give the players their own bestiary - an encyclopedia of weird and wonderful beings - with brief scrawled descriptions, unstatted; the conceit would be that this was the uncle's notes on the beings he had encountered in the "other place". This would, I'm sure, build tension, as the players read through the descriptions and wonder what "a grey, mottled, bony thing with horrid moth wings and dead staring eyes" was and how dangerous.
Posted by noisms at 02:49