An Example of the Yoon-Suin Gazetteer in Action

I thought it would be nice to show what my Yoon-Suin supplement (provisionally entitled the "Yoon-Suin Gazetteer") allows a DM to do. This is an example of how a campaign centred in the Yellow City could be brainstormed. There is no fluff or interpretation at all, here. I simply spent about half an hour following the process, rolling dice and noting down the results. Some of it will not make sense without the book in front of you; it's just a sample of what can be done in a very short space of time.

There is still leg-work for the individual DM to do after such a process, as will be apparent: joining up the dots and fleshing things out is something that takes a little extra time. What the book doesn't do is tell you what to do with the data that's generated. That's for you to use your imagination.

So, the first thing to do is to draw up a social circle for the PCs. This involves generating a handful of social groups which the PCs know of and are known to, and a handful of NPCs they likewise know of and are known to. Not all of the information regarding them is known to the PCs, of course. And this is just a tiny fraction of what is out there in the Yellow City; this is a huge city, teeming with life.

A Noble House, called the Purple Family. [A Noble House is a mercantile, trading family, somewhere between a mafia clan and a legitimate commercial interest. They control all the trade in and out of the city together with the other Noble Houses, and are the only form of government, such as it is. All the members are slug-men.]

There is a conflict within the Purple Family: the spouse of the matriarch and the teacher of the matriarch's children are in an adulterous relationship.
There is a rumour that somebody tried to poison one of the high-ups in the family, but accidentally killed a taster instead. The family want to know the culprit.
*
A Shrine, to a hawk-aspected demigod with food, males, and death as her spheres of influence. She demands sacrifices of invertebrates, and her holy colour is green.
The head sacrificer at the shrine has an incurable addiction to a certain type of opium.
There is a rumour that an important holy artefact has gone missing.
*
Another Shrine, to a crane-aspected demigod with famine as her sphere of influence. She demands sacrifices of mammals, and her holy colour is black.
A mad visionary has stolen something from the shrine.
There is a rumour that under the shrine there is a network of catacombs the members believe to be haunted.
*
A Philosophical Society, who practice sophistry.
One of the members, an important scion of a Noble House, has been driven mad by his ruminations.
There is a rumour that the society wants a former member, who has renounced its beliefs, assassinated. There is a further rumour that the society wants hallucinogens to further expand its theoretical insights.
*
An Exploring Guild, called the Society of Many Journeys.
A magician patron is betraying them by passing secrets to a rival.
There is a rumour that the group have recently brought a strange, puissant artefact back from a journey - and powers in the city want it.

Next, some individual NPCs contacts of the PCs.

(The humans)
A cockroach butcher, over-friendly, called Pallab. He desires adventure.
An embezzler, called Rusheek, who is always accompanied by a small child. He has a rival.
A jeweller, with a haunted, desperate air, called Raakhi. She has a rival.
An assassin, with white pupils, called Mahek. She is jealous of the possession of another.


(Slug-men)
A scholar of automata, called Po Le, who is always accompanied by two slaves. He desires more knowledge.
A teacher, called Polaha Vo, who is especially slimy. He needs to pay off crippling debts.
A magician, called Malaba, who is a lover of the arts. He hates an enemy.


As you will see, there are plenty of opportunities for adventures, missions, jobs, plots, and schemes there already.

Once the social circle has been established, the next stage is to develop further hooks. These are jobs or adventures that can be found out by the PCs simply by asking around the nearest opium den or tea house.

First, there are random connections.

A holy man, a small person called Edhas, needs to transport something to an assassin.
A cockroach clan chief, a grossly fat man called Mahantha, wants a dwarf refugee kidnapped.
A philosopher, Giriraj, who always walks on tip-toe, wants something stolen from Puli, an over-friendly beggar.


Then, there are simple random rumours. I'll just roll up 3.

Russet mould has taken over a ghetto and is turning everyone in it into mould men.
A vampiric mist has made its home in a park in the grounds of a palace.
Golden wormlings have burrowed from somewhere into the basement of an archive and have been eating all the books and scrolls.

This creates the raw material for a city-based campaign; as I said, it took roughly 30 minutes to generate it. It's now the job of the DM to start fleshing this out as appropriate. Clearly, there is no need to flesh out everything here. But as I hope you'll see, you can start off with the Yellow City chapter, roll some dice for less than an hour, and hey presto! there should be at least a dozen different hooks there for you to create into fully-fledged "rumours" to begin a Yellow City-based sandbox.

And it only scratches the surface of the different possibilities available.

Next, we turn to the surroundings of the Yellow City. 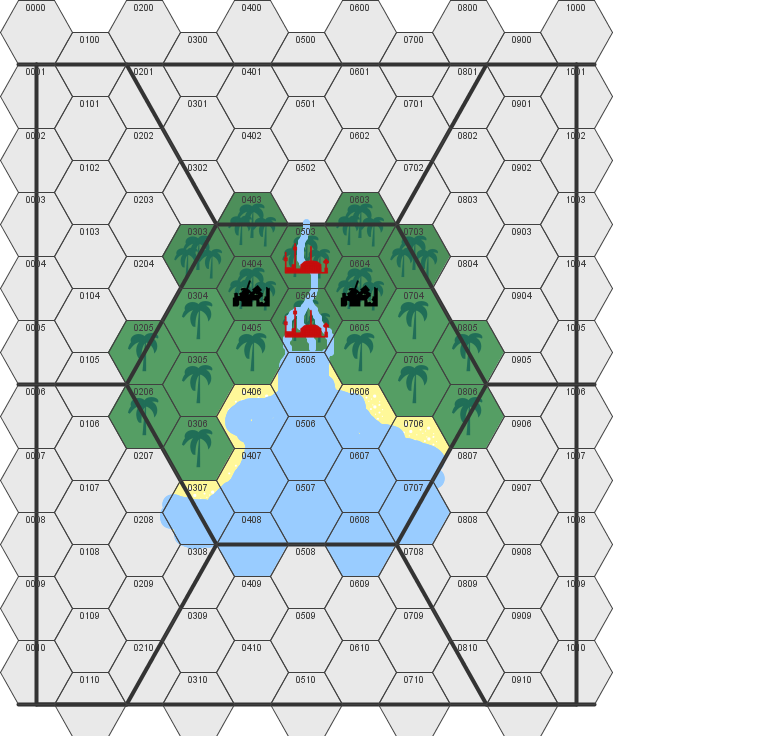 The map looks like arse; it will look better in the final version. The red city icons are the Yellow City proper; the black ruined icons are the Old Town - parts of the city which have been abandoned over the course of the aeons and gradually returned to the forest; they are home now to ghosts, exiles, outcasts, and mysterious magical features. The sea hexes are dotted with small islands - the Topaz Isles - which contain many small communities, monster lairs, etc.

There are three steps here. The first is to generate, and place on the map, some small communities which are found on the Topaz Isles. I generated four:

A Mine, which mines turqouise. It has 13 guards, a 2 HD leader, and 75 slaves, with 16 units of turqouise ore. The ferry, which is the only line of communication with the city, has sunk, leaving the mine isolated. Three significant NPCs were rolled up: the ferry captain; a disloyal, influential slave; and a brutal foreman.

Another Mine, which mines tourmaline. It has 12 guards, a 2 HD leader, and 60 slaves, with 19 units of tourmaline ore. A gang of slaves are sneaking resources out to local smugglers. Three significant NPCs were rolled up: a brutal foreman, another brutal foreman, and the chief engineer.

A Smugglers' Den. The smugglers are being actively sought after for retribution by a Noble House. It is a medium-sized network, with 60 members. In the den they have Treasure Type E, 14 units of opium, 15 units of tea, and 6 slaves.


Next some lairs. Again, I generated four.

Makara. [Stone statues resembling a humanoid crocodilian with a peacock's tail; they are found here and there in the Topaz Isles, sometimes submerged in the shallow seas, sometimes on land.] They are 8 in number. The makara are waiting for the return of an ancient artefact; one of them, obviously marked out as a leader, seems to be holding its hands out in waiting. Once the artefact is returned, the makara will serve the returner for one lunar month. Treasure: Lx5.
-The ancient artefact is a disc, 18 inches in diameter, of complexity 10. It is made of shell. It emits a shimmering sword of sheer force which can be wielded as per the Mordenkainen’s Sword spell, activatable once per day for d6 turns.

Locathah. 150 in number, with a 5 HD leader, 12 3 HD guards. Treasure Type: A. The locathah are experts at capturing squid-men and have d3 of them captive on any given day.

Sea naga. It lairs in a deep cave in a cliff face which curves back on itself in a spiral; the naga's home is in the middle. It has Treasure Type G. It is worshipped by a group of tamasic men (gibbon men, 16 in number, with Treasure Type B).

Tamasic Men. 19 in number, axlotl men. They have uncovered an ancient artefact during their miserable attempts at mining.
-The ancient artefact is a star, of complexity 2. It is made of stone. It can be activated for prismatic spray 1/week.

These lairs and small communities are then placed on sea hexes as desired. In addition to the random generator tables which create these adventure locales, there are also 20 pre-made adventure locales of my own design which can also be placed here and there on the map.

Ancient Artefacts are generated randomly and have a system a little like that found in Gamma World 2nd edition; the greater the complexity, the harder the artefact is to operate and the more likely that something will go wrong when the PCs are trying to figure it out.

Tamasic Men are men who have been re-incarnated in animal form due to their indolence and complacency in previous lives.

Finally, I decide to generate a few ruins in the Old Town. Whenever PCs want to explore the Old Town they can do this and there is a system for randomly generating their discoveries as they go. But Old Town locations can also be pre-determined if the DM desires it. I thought I'd roll a couple up as additional adventure locales which the PCs can hear about.

Ruin 1 – A park. Old, overgrown, with crumbling walls. The main inhabitant is a ghost - a seductive baital [a type of demonic spirit which inhabits corpses]. There are also gloomwings lurking in the trees.

Ruin 2 – A ziggurat, ancient and reclaimed by forest. The main inhabitants are cultists. It is a small cult – a 1st level holy man, 3 1st level holy man assistants, and 14 1 HD members. Treasure Type: C. The cult is despised and persecuted by a religious sect in the city proper. They are millenarian and cruel.

Ruin 3 – A plaza. Old, overgrown, and crumbling. The main inhabitants are exiled revolutionaries. They are race warriors advocating genocide of slug-men. But they only pay lip-service to their beliefs. They actually have abandoned themselves to wanton hedonism. They are a small band of 11, with one 2 HD leader and Treasure Type: C.

A Special Site - A high column. It is covered in spiders' webs; the spiders are poisonous (save versus death; success is 20 hp damage). The column is hollow and a secret door leads inside to a narrow chamber. Within is a trove of Treasure Type: I. It is guarded by two chinthe [guardian lion/dog spirits] who have been trapped there for aeons.


As stated, some of this will not make total sense without the book in front of you; also, bear in mind this is one substantive chapter out of seven; there are five other geographical zones which have similar random-generation systems for campaign set-up brainstorming. Each is approximately 60 pages. There is also a bestiary with 50+ entries, rules on character generation, and Appendices A-Q, ranging from a random poison generator to fortune telling rules, to rules on magical tattoos.