We tend to think of 'the apocalypse' as a destructive, catastrophic event - a plague, a meteor strike, a nuclear war. Greek myth gives me an idea for a different model: apocalypse via deranged demigod.

"It was on Mount Nysa that Dionysus invented wine, for which he is chiefly celebrated. When he grew to manhood Hera recognized him as Zeus’s son, despite the effeminacy to which his education had reduced him, and drove him mad also. He went wandering all over the world, accompanied by his tutor Silenus and a wild army of Satyrs and Maenads, whose weapons were the ivy-twined staff tipped with a pine-cone, called the thyrsus, and swords and serpents and fear-imposing bullroarers. He sailed to Egypt, bringing the vine with him; and at Pharos King Proteus received him hospitably. Among the Libyans of the Nile Delta, opposite Pharos, were certain Amazon queens whom Dionysus invited to march with him against the Titans and restore King Ammon to the kingdom from which he had been expelled. Dionysus’s defeat of the Titans and restoration of King Ammon was the earliest of his many military successes.

"He then turned east and made for India. Coming to the Euphrates, he was opposed by the King of Damascus, whom he flayed alive, but built a bridge across the river with ivy and vine; after which a tiger, sent by his father Zeus, helped him across the river Tigris. He reached India, having met with much opposition by the way, and conquered the whole country, which he taught the art of viniculture, also giving it laws and founding great cities.

"On his return he was opposed by the Amazons, a horde of whom he chased as far as Ephesus. A few took sanctuary in the Temple of Artemis, where their descendants are still living; others fled to Samos, and Dionysus followed them in boats, killing so many that the battlefield is called Panhaema. Near Phloecus some of the elephants which he had brought from India died, and their bones are still pointed out.

"Next, Dionysus returned to Europe by way of Phrygia, where his grandmother Rhea purified him of the many murders he had committed during his madness, and initiated him into her Mysteries. He then invaded Thrace; but no sooner had his people landed at the mouth of the river Strymon than Lycurgus, King of the Edonians, opposed them savagely with an ox-goad, and captured the entire army, except Dionysus himself, who plunged into the sea and took refuge in Thetis’s grotto. Rhea, vexed by this reverse, helped the prisoners to escape, and drove Lycurgus mad: he struck his own son Dryas dead with an axe, in the belief that he was cutting down a vine. Before recovering his senses he had begun to prune the corpse of its nose and ears, fingers and toes; and the whole land of Thrace grew barren in horror of his crime. When Dionysus, returning from the sea, announced that this barrenness would continue unless Lycurgus were put to death, the Edonians led him to Mount Pangaeum, where wild horses pulled his body apart.

"Dionysus met with no further opposition in Thrace, but travelled on to his well-beloved Boeotia, where he visited Thebes, and invited the women to join his revels on Mount Cithaeron. Pentheus, King of Thebes, disliking Dionysus’s dissolute appearance, arrested him, together with all his Maenads, but went mad and, instead of shackling Dionysus, shackled a bull. The Maenads escaped again, and went raging out upon the mountain, where they tore calves in pieces. Pentheus attempted to stop them; but, inflamed by wine and religious ecstasy, they rent him limb from limb. His mother Agave led the riot, and it was she who wrenched off his head.

"At Orchomenus the three daughters of Minyas, by name Alcithoë, Leucippe, and Arsippe, or Aristippe, or Arsinoë, refused to join in the revels, though Dionysus himself invited them, appearing in the form of a girl. He then changed his shape, becoming successively a lion, a bull, and a panther, and drove them insane. Leucippe offered her own son Hippasus as a sacrifice—he had been chosen by lot—and the three sisters, having torn him to pieces and devoured him, skimmed the mountains in a frenzy until at last Hermes changed them into birds, though some say that Dionysus changed them into bats. The murder of Hippasus is annually atoned at Orchomenus, in a feast called Agrionia (‘provocation to savagery’), when the women devotees pretend to seek Dionysus and then, having agreed that he must be away with the Muses, sit in a circle and ask riddles, until the priest of Dionysus rushes from his temple, with a sword, and kills the one whom he catches.

"When all Boeotia had acknowledged Dionysus’s divinity, he made a tour of the Aegean Islands, spreading joy and terror wherever he went. Arriving at Icaria, he found that his ship was unseaworthy and hired another from certain Tyrrhenian sailors who claimed to be bound for Naxos. But they proved to be pirates and, unaware of godhead, steered for Asia, intending to sell him there as a slave. Dionysus made a vine grow from the deck and enfold the mast, he also turned the oars into serpents, and became a lion himself, filling the vessel with phantom beasts and filling it with sound of flutes, so that the terrified pirates leaped overboard and became dolphins.

"It was at Naxos that Dionysus met the lovely Ariadne whom Theseus had deserted, and married her without delay. She bore him Oenopion, Thoas, Staphylus, Latromis, Euanthes, and Tauropolus. Later, he placed her bridal chaplet among the stars.

"From Naxos he came to Argos and punished Perseus, who at fought opposed him and killed many of his followers, by inflicting a madness on the Argive women: they began devouring their own infants; until Perseus hastily admitted his error, and appeased Dionysus by building a temple in his honour.

"Finally, having established his worship throughout the world Dionysus ascended to Heaven, and now sits at the right hand of Zeus as one of the Twelve Great Ones."

- From "Dionysus's Nature and Deeds", The Greek Myths, Robert Graves


The Greeks gave themselves a get-out by imagining Dionysus finally ascending to Heaven and leaving them alone. What if he never did? What if he and his cronies spent the rest of eternity roaming from place to place, driving everybody mad, turning them into animals, forcing them to kill and eat their own family members, and only giving them a modicum of relief if they devoted themselves to his worship?

It's not an apocalypse of blasted, barren wasteland, of mutants and zombies, or of Mad-Max style violent nomads racing across permanent deserts. It's an apocalypse of insanity and transmogrification, where you're never sure when Dionysus is going to show up with his satyrs and force you to eat your own grandma or turn you into a dolphin, and where civilization has turned cosmically deranged at the behest of a mad deity and his gang.
Posted by noisms at 04:00 16 comments:

I thought I'd post a few pages from Yoon-Suin to show what kind of thing I'm playing around with regarding layout. The first page is a chapter heading; the second is a section of the bestiary; the third is a table from the Yellow City chapter. The picture of the slug-man is by an Australian illustrator called Matthew Adams.

Things may not look exactly centred. That's because I'm formatting it to be used for a POD version so the margins are slightly longer on either the left or right side depending on the page. As you'll see, it's going to be landscape. I prefer it that way.

I selected three pages from the full Word document and simply copied them into a second document to make into picture files, which is why the second and third pages are numbered '2' and '3'. These pages obviously don't come directly after each other. Anyway, hopefully it gives an insight into what the final product is shaping up to look like, and proves that the whole thing isn't a mere figment of my imagination. 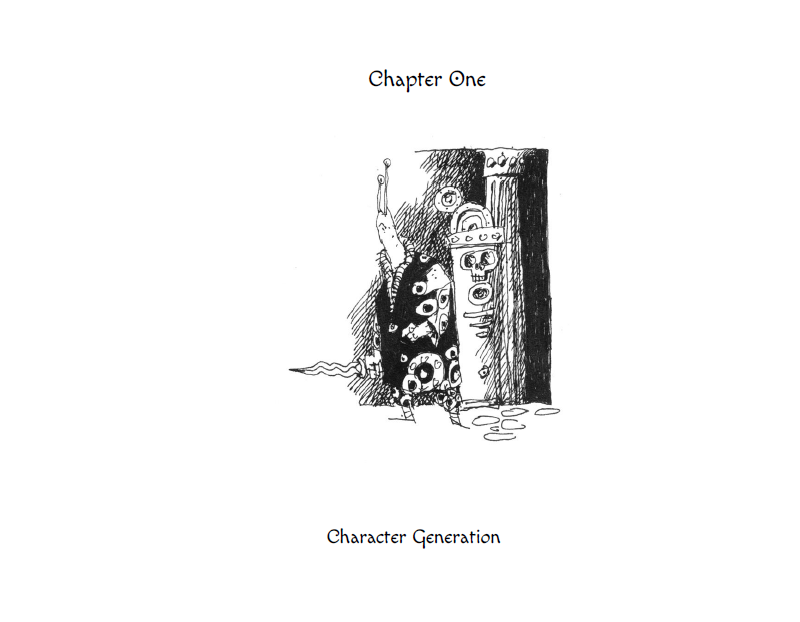 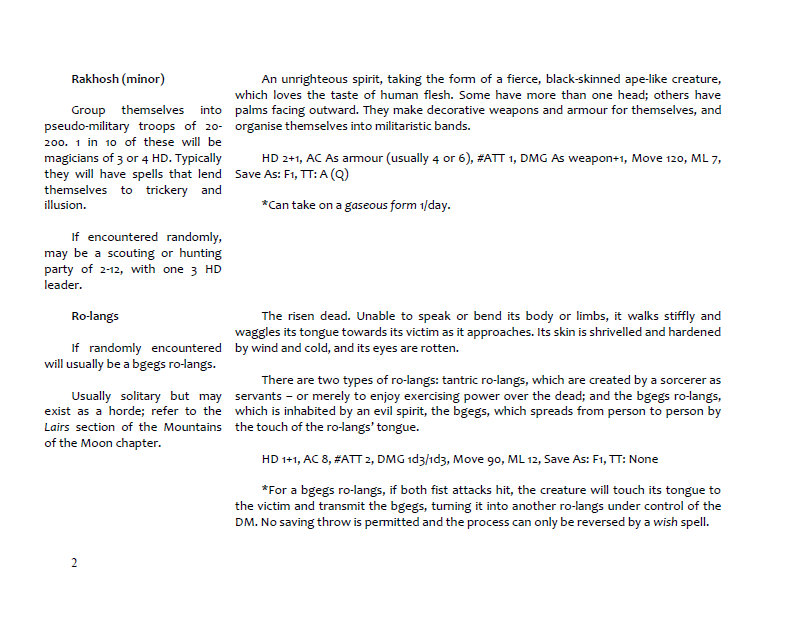 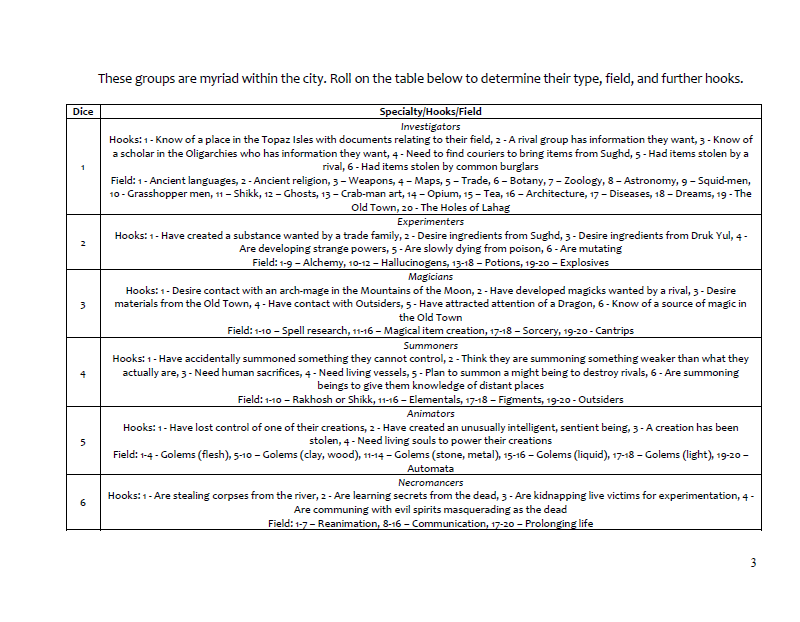 The ancient Chinese had their own system of organising the stars, which revolved around, amongst other things, grouping 28 phases of the moon into 4 sets of 7 according to the compass points. Each set had a symbol - the Azure Dragon of the East, the Black Tortoise of the North, the White Tiger of the West, and the Vermilion Bird of the South.

I don't know much about this, or about ancient Chinese history or culture, but I do think having the points of the compass associated with symbolic beings really fucking cool.

It gets me thinking about a recent conversation on G+ on how dice can communicate four different things - position, number, number of sides, and colour. Roll a fistful of different dice and you get four different variables, or five even if you include how a d8 can 'point' in a direction. Wouldn't it be interesting to have a set of dice of four different colours, each symbolising, say, one of the elements - or, respectively, the blue dragon of the East, the black tortoise of the North, the white tiger of the West, and the red bird of the South?

The way I envisage this working is, there are literally four gargantuan beings in the world, each at an extreme point of the compass. (The world being a big flat disc - duh.) And they each influence the world in different ways. Let's say, for the sake of argument, the blue dragon of the east represents warfare and conflict, the black tortoise of the north represents protection and survival, the white tiger of the west represents trickery and cunning, and the red bird of the south represents beauty and passion.

Any time any player needs to roll a dice, they can pick a colour and explain why it is relevant. Most obviously, if you were rolling to-hit in combat, you'd probably want a blue dice - but you might want a white one if you were backstabbing or ambushing. If you were trying to charm a princess you'd use red - unless you were impressing her with a display of toughness, when you might use black.

If the player in question doesn't want to invoke one of the compass point mighty beings, he just picks a neutral dice. Green or yellow or whatever. And the result stands as it stands.

A half-formed and exhausted thought for a Thursday. What were you expecting - something useful?
Posted by noisms at 06:22 7 comments: