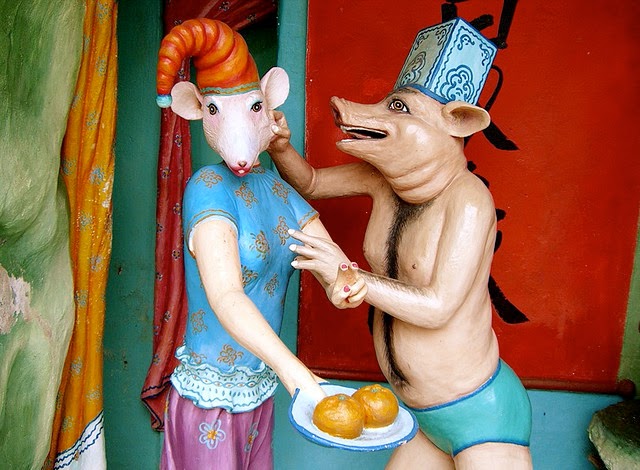 
Observation 1: Hit points are an abstraction which represent morale, fatigue, fitness, and so forth as much as health. (The classic statement of this being the fight between Robin Hood and Sir Guy of Gisbourne - erroneously identified in places as the Sheriff of Nottingham - from the classic Errol Flynn film; see this ENWorld post. The fight goes on for some time and the two figures don't wound each other until the killing blow, but Gygax seems to have imagined them losing hit points during the course of the combat nonetheless.) A lot has been written on this point, not least by me. But I don't think I'm saying anything controversial, either, if I suggest that the great majority of DMs tend to describe combat in a manner which suggests hit points are more concrete representations of health. What DMs tend to do (and I include myself in this), is that they describe the attack roll as being like the swing of a sword, and if it's a miss it's described as "you slash at the orc but don't connect" (or whatever), if it's a hit that does 1 hp of damage it's described as "you slash the orc across the shoulder" (or whatever), and if it's a killing hit it's described as "you stab the orc through the heart" (or whatever). This doesn't really square with this notion that hit points are an abstraction.

Observation 2: Hit points are actually fairly good at modelling what happens in a fight, in that wounds and injuries recieved, especially to the torso, tend not to affect combatants all that much until a genuine killing or knockout blow is recieved. A couple of times in my sporting life I've bruised or fractured ribs, or had a nosebleed or broken toe, and been able to finish whatever I was doing without much inconvenience. You don't notice the pain, often, until later in the day or the next morning when you can't get out of bed. This is due to the wondrous effects of adrenaline, obviously, and it's actually reflected quite well in D&D hit points, whose loss does not at all affect a combatant's ability to fight, but which do require healing afterwards. See also this short section from Barbara Tuchman's A Distant Mirror:

In one combat Don Pero Nino was struck by an arrow that "knit together his gorget and his neck," but he fought on against the enemy... "Several lance stumps were still in his shield and it was that which hindered him most." A bolt from a crossbow "pierced his nostrils most painfully whereat he was dazed, but his daze lasted but a little time." He pressed forward, recieving many sword blows on head and shoulders which "sometimes hit the bolt embedded in his nose making him suffer great pain." When weariness on both sides brought the battle to an end, Pero Nino's shield was "tattered and all in pieces; his sword blade was toothed like a saw and dyed with blood...his armour was broken in several places by lance-heads of which some had entered the flesh and drawn blood, although the coat was of great strength."


I've been considering these observations lately; and in particular I'm considering whether anybody actually needs the weird genuflection of hit points representing intangibles like morale and fatigue. I used to find Gygax's reasoning fairly convincing, to a point, but now I'm not sure. Combatants get injured during a fight by hits from enemy attacks. They don't really notice it during the fight unless it's very serious - because of the adrenaline and their own toughness. There's no great inconsistency there between the model and reality. The only tweak I might add to my games in future is something like this:

Out with the Old

It happened like this in the world. Old things lost their grip and dropped away; not always because they were bad things, but sometimes because the new things were more bad, and stronger.


I am a lover of old things. Not all old things, and of course the principle only stretches so far, but I think in general I prefer the tried and tested to the new. I prefer Bach to Jay-Z, test cricket to t20, Shakespeare to Zadie Smith, old-fashioned real ale to fancy ciders and "fursty ferret" style ironically fashionable old-fashioned ale (I write this blog entry drinking a can of Courage Director's), classic cocktails to passion fruit fucking mojitos, classic rock to whatever it is kids listen to nowadays, analogue to digital, karate to MMA, hand-carved wood furniture to stark modernist stuff, gothic architecture to brutalist concrete, etc., etc. It isn't a hard-and-fast tendency by any means - and I have basically no tolerance for fakeness (I don't know about in the US but pseudo-Victoriana is the fashion of choice these days amongst hipster knobheads in Britain) - but it's a certain leaning.

Is my leaning towards old things the reason I like old RPGs? Undoubtedly yes. I like them because they are old. Not necessarily because there is an intrinsic value in oldness (though I do believe that there often is), but simply because I like things that have been around for a long time. I like having a connection with the past and with older ways of doing things. The new, the glossy, the shiny, the sparkly, is not usually all that attractive to me. I find it off-putting and ephemeral. I tend to view it with suspicion and often find its success to be attributable, as TH White did, to simply being more bad, and stronger. Much of the modern RPG industry, if its possible to speak of such a thing at all, strikes me as being that: more bad, and stronger, than what was being played in decades past.

Our preferences tend not to be rational, and I think we kid ourselves if we pretend otherwise, but I also think a rational argument can be made as to why one should prefer old things - which is simply that, if something has been around for a long time, there is probably a reason for it. The onus ought to be on new things to prove their worth: we can take Shakespeare as great simply by dint of him still being considered so important 400 years after his death, whereas modern authors have the burden of proof to demonstrate they aren't passing fads. The world of rock is the same: the latest NME flavour of the month may be a great band but let's wait 30 years or so and see if people are still listening. Of course, nothing of this is set in stone - there are plenty of things that have been around for a long time which are criminally awful (e.g. Bono) and sometimes unutterably terrible things become grandfathered into greatness for no good reason (e.g. Star Wars Episode II: The Clone Wars). And this is contingent on survival: the preference is not for old things at all costs, but for old things which have proved themselves by surviving. But I think there are strong reasons for the following rule of thumb:


This is why, for instance, I'll rely on BECMI rather than buy D&D 5th edition, and why I'll try to track down the Top Secret RPG before looking for other, newer games. It's not that I'm sure the old things are better, it's that faced with a choice and with limited time, I'll go for the tried and tested. I'll trust that rule of thumb.

(There are other, less prosaic arguments too, of course. I'm thinking here of Burke's metaphor of the flies of the summer, whose lives are meaningless because they are self-contained, without past or future, neither inheriting nor bequeathing but simply living. I'm thinking also of MacIntyre and his 'goods internal to practices'. But I'll leave those for a future entry.)
Posted by noisms at 04:13 22 comments: