Summerland, or the Spookiness of Rural England in August 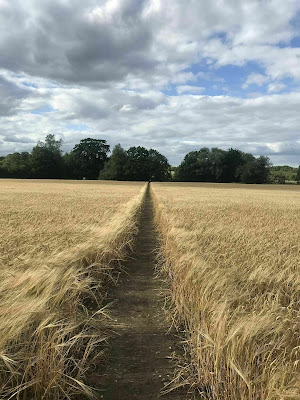 Rural southern England is, for the tourist, like an archipelago of island villages separated from each other by gulfs of agricultural sea - fields, hedgerows, trees, tiny single lane roads, footpaths, ditches, brambles, woodland.

Each village you pass through while driving is quaint, pretty, sleepy, and prosperous - pink/blue/yellow houses; ancient sprawling oaks on wide, perfectly trimmed greens; roadside stalls containing fresh eggs and honey; always a big 15th century pub with lots of BMWs and Mercedes parked outside; always an ornate, grand and beautiful church, impossibly large for such a small settlement and with an impossibly large graveyard dotted with yew trees; always a village hall with colourful bunting.

Then within less than a minute you have driven through and you are on the other side and in a different world. Hedgerows cramp you in, occlude your vision. Through gaps in the foliage you see fields sweltering in the sun; copses of brooding trees, big and green; scarecrows; deer; distant farmhouses and water towers. On a hot day with no other cars on the road and storm clouds brewing in the distance you feel as though this landscape could have been here forever, and indeed could be endless - that you could drive for the rest of your life and see nothing but more fields, more woods, more scarecrows, more dilapidated barns and far-off solitary dwellings.

Until you come to another village and a 30 mph speed limit sign and the pattern repeats.

As a northerner and a city dweller I find this landscape both beautiful and disturbing. The truth is, I am more comfortable in the north's wild moors and bleak, windswept hills than I am in this bucolic bricolage where the furniture of a rural idyll - the hedges, fields, and country lanes - seem almost to crowd you in and swallow you. You are not being welcomed into rural bliss. You are darting from village to village, hoping that somewhere in between you don't stray down the wrong road and get gulped down into a timeless, measureless void - a countryside labyrinth from which there is no return and that will hold you suspended like an insect in amber for the rest of eternity.

I envisage a setting in which the people dwell in small villages between which are fields and woodlands carefully husbanded by things that are malevolent and strange. The village-dwellers never stray beyond their boundaries unless they can possibly help it, and when they do, they always stick to the tried and true paths. They never go over that style, or go down that side track, or go into that copse. And as soon as they see somebody out there, working in the fields or walking down a track, hoe in hand, they freeze - or flee in terror. They live surrounded by the fear of long, hot, hazy afternoons when the fields doze in the heat; of mornings cool with mist and dew when the dwellers of the farmland are abroad; of the sudden eruption of motion as wood pigeons are disturbed by someone walking through the trees; of the distant sound of gunfire - pop pop pop - and bugles that signal a hunt has begun...

Patrick S, the False Machine, made me think about languages in RPGs. This is one of those areas, I feel (like underwater adventuring and flying combat) which is still crying out for somebody in the OSRchipelago to revolutionise with something really useful, fresh and compelling. I will by no means attempt to do that here. But here are some thoughts about how to make languages interesting and meaningful.

Different jargons and lingua francas function in different parts of the map. So you can speak one sort of 'common' to all the monsters in hexes AA, AB, and AC, but have to use a different kind (or a translator) in hexes BA, BB, and BC. Adds a hurdle to exploration - the good kind of hurdle, which requires more engagement with the game world.

Real-life explorers, I once read, often used young girls as translators, because being young and female is generally correlated with excellent language-learning ability. The PCs having to keep safe a frail adolescent on their adventures could add a lot of nuance to proceedings. But equally, you could just say that the common tongue is really difficult and requires so much training (or special equipment like whistles, flutes, drums, and so on) that it requires an expensive specialist. The PCs have to pay money to hire one, and have to stop the otherwise useless NPC from being killed into the bargain.

3. The Common Tongue is Not Just a 'Tongue'

Maybe the common tongue incorporates pheromones, or the use of coloured paint, or some other expensive or rare chemical (of, if you want to go more exotic and strange, maybe some 'common' phonemes can only be produced by a species of insect or bird that you have to carry around with you and encourage to squeak at certain moments). It's expensive to pay for all this stuff - or it is a rare resource the PCs have to search for, and husband. (Do we really need to parlay with these orcs? No, we can't waste the pheromones!)

4. The Common Tongue is Dangerous

Speaking common is not to be trifled with, because talking to a dragon, orc, elf, hook horror or whatever is to have one's consciousness moulded, however fleetingly, by alien concepts and thought-patterns that, because one understands the words being used, one is forced to entertain. The effort can result in madness or corruption, and whenever one speaks common there is a small risk of either of those or both occurring.

5. The Common Tongue Has to be Performed

The common tongue is a crude communication tool which you actually have to deploy at the table. Maybe it's an SOS style system of taps and pauses. Maybe it is comprised of words, but there is a strictly limited list of, say, 51 or 101 that you can use. Maybe it is made up of gestures. Much hilarity ensues.

A few months ago I launched an art competition, the requirement for which was to draw a colour picture of Laren Dar, a PC from my weekly game, described as:

An Etruscan fighting man wielding a magical Thracian axe and shield, wearing a wooden helmet shaped like a soldier-ant's head, a wooden breastplate decorated with soldier ant pictographs, a red silk surcoat covered in strange Etruscan lettering in gold, and a cloak made out of falcon feathers.

It had been my intention to announce a winner, but I find it very hard to pick between these two, so I have decided they are joint winners. Both will get a copy of the first level of the 'megadungeon inside a giant tree' game I am running (as soon as I've got it typed up and vaguely usable!). 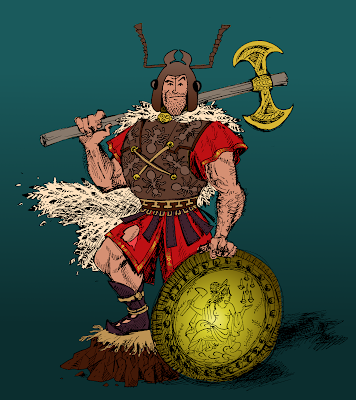 And the second is by Marc Caldwell (@scavengine on instagram): 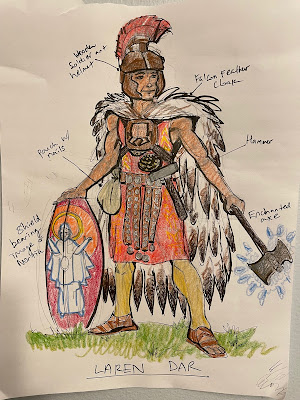 I was really impressed with the quality of these pics. I was expecting stick-men at best. Thanks to everybody who took part, and congratulations to the winners!

As a bittersweet postscript, Laren Dar was killed by a jumping-spider elf just a few short weeks after the competition was launched. He now resides in a sarcophagus in the PCs' ever-growing cemetery at the back of their garden.

Recommend Things to Review and Read

People have said that they enjoyed the recent spate of reviews that I did. So I thought I would ask the erudite and educated readers of my blog for some further recommendations of things to read and review. Preferably OSR or 'OSR adjacent'.

I also thought that since I am asking, I would ask for some other reading recommendations, as I am finally coming to the end of a huge backlog of books bought during lockdown. I am looking for:

The Phenomenology of Missing in Melee Combat

In old school D&D there is a great deal of missing. A 1st level character of any class battling almost any enemy will land a hit comfortably less than half of the time. It is not unusual indeed for a character to go through 5 or 6 rounds of combat just rolling dice and missing.

Despite what we know about 1 minute combat rounds, and despite the fact that we know that a failure 'to hit' doesn't necessarily mean an actual failure to hit but a failure to score a damaging hit (which is why I once half-jokingly suggested that the 'to hit' roll should be called the 'to attrit' roll instead), in my experience we still at the table tend to imagine in our minds' eyes that when a character 'misses' they have taken a swing at the enemy and physically missed. And that is how we tend to describe events, too: 'You swing at the orc and miss.'

I've sometimes toyed with a minor house rule to try to nudge me away from thinking in those terms: if a character 'misses' by more than 5 then you describe him as having hit but failed to penetrate the enemy's armour or shield. But that still links the dice roll too closely to concrete events in combat, when it is  something much more abstract than that; the result is really an aggregate of everything that the PC does in the course of a minute. That could be many 'hits', or none.

How do you describe 'missing' during combat?