This holiday I've spent clearing out my parents' old house. Part of this process has involved me appraising my old books (of which there are hundreds and hundreds) and trying to decide which can be thrown out and which can go to the local library or charity shop or whatever. I came across Leiber's Ill Met at Lankhmar, a collection from the early 2000s which brings together, I think, "Swords and Deviltry" and "Swords Against Death".

Re-reading these old stories, it occurs to me that you may as well not read any high fantasy series published in the last 30 years or so if you've read Leiber. I use the words "high fantasy" advisedly, because although the Fafhrd and Grey Mouser stories are more sword & sorcery than high fantasy, almost all high fantasy stuff that was published in the 80s, 90s and 00s was a footnote on what Leiber was writing in the 70s - from the back-story to both men (every main character in every epic fantasy series has a tragic origin story like Grey Mouser) to the sassy, just-as-good-as-you female leads who are just dim reflections of Vlana, to the innocent-girl-turned-unlikely-heroine female leads who are just dim reflections of Ivrian, to the strong themes of revenge, to the very un-Tolkienesque prevalence of magic (divided, as so often the case, into 'good magic' and 'bad magic')... It makes the Fafhrd and Grey Mouser stories seem like old hat, until you remember that no, it's just that most modern fantasy series were old hat before they were even conceived.

A while ago, because I felt like being controversial, I made the statement on some forum or other that I though that the Dragonlance books are probably just as good as most of the things in Appendix N. Although I said that with mischievous intentions, I also think it's true. The Dragonlance books are not great, but for a 13 year old boy they are good entertainment, and that is really the most you can say for most of the Michael Moorcock books, most of Lovecraft's fiction, Edgar Rice Burroughs, Phillip Jose Farmer, etc. People in the D&D blogosphere might not like to admit it, but the best you can say about a lot of the writings of a lot of those writers is that they pass the time and have some interesting ideas in. Admittedly there are a number books/authors on Appendix N that I've never read, but even if those works were all hidden masterpieces it would still place Weis & Hickman somewhere in the middle-to-lower rung. In a weird sort of a way, they probably deserve more credit; I know this doesn't apply universally, but I generally think of great books as being those which have moved me emotionally - and I have to confess that I was very moved emotionally as an adolescent reading about the death of Sturm or Caramon's efforts to stop his mad brother destroying the universe. Much more so, indeed, than I ever was reading about Elric's exploits, fun though they are.

Which fantasy books are really worth reading? Given that you have a finite amount of time in your life and there are so many other books out there? There's a novel by Jonathan Franzen called Strong Motion, which like all of Franzen's books is beautifully and sensitively written, if somewhat appalling at the same time; in it there is fairly extended section which describes the evolution of the music collection of one of the characters, Dr. Reneé Seitchek. She starts off with a large collection of punk music on old cassettes, but as time goes by and she gets older and older and more jaded her collection starts to dwindle and she starts just compiling mix tapes with some of her favourite tracks on...but as time goes by and she gets older still she starts to grow tired even of them, and she ends up just taking segments of single tracks that she likes and running them together, so that she finishes off compressing all of the music in the world that she likes into a single cassette or two. I sometimes feel like that about fantasy fiction. Give me a single 1000 page volume containing the distilled essence of Vance, Wolfe, and Tolkien and that may very well do me for the rest of my days.
Posted by noisms at 21:17 26 comments:

Email ThisBlogThis!Share to TwitterShare to FacebookShare to Pinterest
Labels: literature

What the Lazy Bastard Has Been Working On; Or, Yoon-Suin is On the Road to Completion, Honest

It's been a ridiculous November and December but I have managed to work a little bit on Yoon-Suin here and there. The content is entirely complete and I'm currently undergoing the laborious process of transferring everything from OneNote to Word (having given up on fancy schmancy layout programs after what seemed like aeons of aimless fiddling). This is about 5-10% finished.

Here are some mysterious screen grabs. No art as yet. That's the final hurdle. 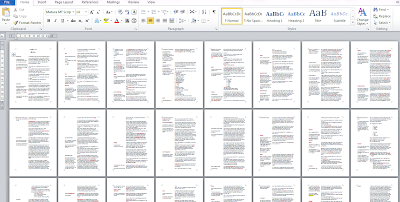 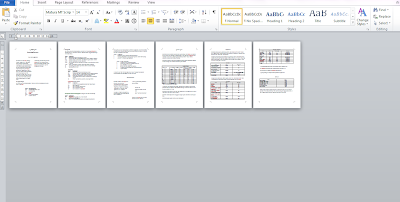 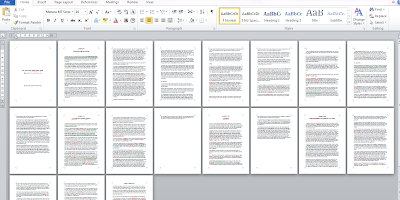 An intermittent theme on my blog down the years (see e.g. here) has been creative constraint: how providing strict boundaries in terms of what the DM and players can create (particularly during the setting up of a new campaign) can actually allow imaginations and inspiration to flourish.

Take beekeeping. The latest Econtalk podcast is all about the economics of beekeeping. While it is wide-ranging and covers everything from how to transport bees to CCD (which means Colony Collapse Disorder - don't you know anything?) to externalities to the almond-growing industry of California, the most interesting section by far in my mind is where the conversation moves onto the idea of migratory beekeepers. This may not be the case in other countries, but apparently in the US many beekeepers spend their working lives travelling around: based in the South, say, and moving to California for the early almond pollination season, then travelling up the West coast through Oregon and Washington for apples, berries, cherries and so on, and then pitching up in the Dakotas to allow the bees to spend summer gorging on sunflowers. Then it's back down South for winter. Similar migratory patterns go up and down the East coast from Florida to Maine and so on.

Saying that you are going to run a beekeeping campaign and you would be characterised as some sort of dangerous eccentric in most RPG circles; not because of the subject matter but because it seems so very limiting. The PCs really have to start off as beekeepers and nothing else? And all they're going to do is travel round with, and manage, bees?

But once the limits are set, the mind starts to whir with possibilities. How about, rather than just having honey bees, the world is full of many different kinds of bee, all with different characteristics, tastes, and vulnerabilities? And how about a d100 table of random bee pests and diseases that might strike at a given moment? What about all the possibilities for hexcrawling: where do you stop for the night with your hives? Where do you migrate to - do you follow the spring as it heads Northwards, or strike off on a different, less travelled path where there are fewer competitors? What kind of monsters and bandits lie in ambush on the well-journeyed routes? What kind of monsters does honey attract in general? There would need to be a set of tables for generating competitor beekeepers, their hives, and helpers, of course. Each would have their own agenda, their own rivalries and alliances, their hidden ancestral knowledge. The same goes for the farmers. There would need to be a system for determining costs based on the presence of competition, weather, crop type...and rudimentary rules for trade in general.

And of course, there would need to be complicated procedures for what happens when bees make honey from the nectar of poisonous plants, or whatever kind of weird fantasy flora you happen to come up with.

I'm not suggesting that the beekeeping campaign is the one we should all be running, you understand. The point is simply this: once constraints are set in place, creativity starts to flourish. Envisage human creativity like water: without barriers it floods endlessly in a very thin and ever-spreading sheen. With constraint it bursts upwards like a fountain. And I give you metaphors like that free of charge.
Posted by noisms at 06:52 5 comments: