About A Great Painting 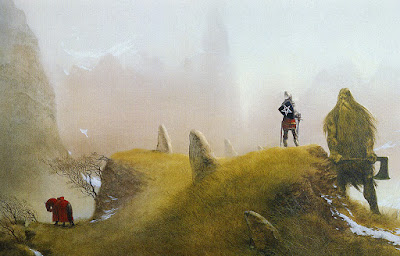 This is my favourite fantasy picture - as much as you can ever have a genuine favourite piece of art, book, film, song, etc. It's John Howe's painting of Sir Gawain and the Green Knight, and it's been my home desktop wallpaper for a long time. I never get tired of looking at it.

I think partly this is just because the landscape is reminiscent of the kind of landscapes which I love and am often hiking or camping in: brooding, desolate moors. It feels like a stylised, approximation of somewhere wild in the British Isles, and if you like that sort of thing, the picture resonates.

I like the way Gawain's shield stands out - the stark white pentangle against black, set against the muted and predominantly green background. To me it's visually but also conceptually striking: the Green Knight is part of nature, almost as one with the background; the knight Sir Gawain is most certainly not.

I also love how Howe refuses to grandstand, which is a hallmark of his work in general: there's no melodrama. Rather the opposite. Sir Gawain looks almost nonchalant as he chats to the Green Knight. Something is going on, of course, but at the same time, it's not a big deal in the grand scheme of things - the world is as it is and always will be, whatever happens. In that sense the atmosphere of the painting reminds me of Bruegel's Landscape with the Fall of Icarus in the way it renders a profound myth humble.

This is reinforced by the horse over there in the bottom left corner. I love that horse. It has no interest in Green Knights, beheadings, struggles for power, broken promises. It's cold and lonely and all it wants is shelter. The painting is as much as, if not more, about the horse than anything else. An animal at the whim of man, dragged along on a quest, but still with its own quiet animal concerns. The picture says a lot about man and nature, and seems to my mind to reconsider how that theme is treated in the original poem, which of course contrasts the chaos of nature with the orderliness of human chivalry. The picture shows man as an interloper in the natural order of things, and his presence is ambiguous rather than ordering: the viewer's sympathy is not so much with the knight but with his poor old horse.
Posted by noisms at 05:51