More Thoughts on the Fixed World: Or, Yes This Setting Involves Deadly Puddings

This afternoon when I should have been working and responding to emails, I instead spent an inordinate amount of time expanding and elaborating on yesterday's post. Below is a better map, keyed with very rough details.

The Fixed World is based around two design principles:

1. This is non-scientific. Seasons and times of day are permanent but nothing has to make sense according to the laws of physics. It's just a fantastical conceit.
2. Only obscure or obscure-ish Monster Manual races and creatures allowed (and humans). 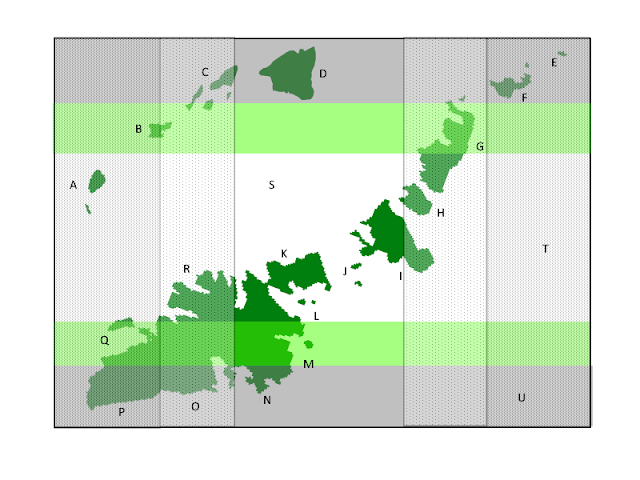 A - Always night, always summer. Warm and dark and perfect for fungi - meaning myconid and vegepygmy civilizations and huge, tree-like mushroom in vast forests. The tiny island to the south is a huge breeding colony for gloomwings, and in the sea caves dotted around the coasts live aboleth princes plotting hate.

B - Always night or dusk, always autumn. Cold, grim, bleak. Still plenty of fungi, but on a smaller scale, and very slow-growing vegetation. Home to a nation of galeb duhr whose knowledge and philosophies are endless - but develop very slowly.

C - A group of islands where it is largely always winter and largely always dawn. Surrounded by semi-thawing pack ice. The seas are home to roving, warring tribes of merrow, who hunt seals and group together on the ice. The land is populated by stone giants, to whom the resident human population - eskimos or paleosiberian types - owe fealty. Little grows except lichens and molds (yellow mold, russet mold, etc.), oozes, jellies, and so forth. Some human tribes have symbiotic relationships with these creatures, and allow them to grow on their flesh.

D - A big island where it is always winter and always daytime. It is divided between a handful of cloud giant lords, who rule over the frost giants and yetis who live inland, and the eskimo/saami-type human tribes by the coast. The seas are home to selkie kingdoms.

E - A tiny island where it is always winter and always night. The frigid home of the beholders.

F - Similarly, an island of permanent dark and cold. In caves under the surface live the derro; above ground roam deadly puddings and various oozes, which can lie dormant for centuries if necessary before finding sustenance.

G - In the north of this big island it is always autumn and always dusk. The mountains are inhabited by dragons - white, red, and the different varieties of gem dragons. Here there is also a kingdom of Aarakocra who build strange monuments on the high mountain glaciers. In the south it is warmer - always summer but always dusk. Perfect conditions for su-monsters, who form psionicistocracies in the dim heat.

I - Here, it is always summer, and also largely day time (except in the East, where human civilizations flourish) - more specifically, a sweltering afternoon. Plants grow to huge sizes - skyscraper-sized trees; grass the size of trees in our world - and the mighty forests throng with giant insects, grippli, tasloi, bullywugs and the like. In the seas are reef giants and locathah polities, and in the sky fly couatl princes.

J - An archipelago ruled by rakshasa. The sea is a vast coral reef where there are morkoths, were-moray-eels, tritons, and so on.

K and L - Huge savannahs and deserts where dinosaurs roam. In places gith sultanates domesticate these beasts for purposes of war and labour. Towards the coasts are harpy queendoms who war incessantly with the gith and each other.

M - The coasts and islands here - where it is spring and always daytime - are perfect for human agriculture and civilization to flourish. In the bountiful sea an unending conflict is fought between sahuagin and aquatic elves. In the west, towards the centre of the continent, are huge plains populated by centaur and wemic bedouins.

N - Here it is always winter and always day. It is ruled by a seawolf prince and his ever-expanding pack of subjects, who grow each year as they raid the human lands to the north (in M). In the seas there is an ixitxachitl empire, rivals of the kuo-toa theocracy to the west (see O).

O - Always winter, always dawn. Misty and covered in frost. The land around the coast is divided between a dozen were-raven lords, each of whom rules his human subjects as a benevolent feudal lord, and each of whom is bound to the others by ancient pacts of alliance. Further north is a vast plain - ever spring and ever dawn - which is dotted with lakes. Each lake is home to a vodyanoi prince and his human fisherman serfs. In the south, the cold seas are home to a kuo-toa theocracy.

P - Always winter, always night. Nothing grows, little lives except xorn and xaren who burrow through the rock, and the hook horrors who hunt them in the cold darkness. Here and there a lich, human arch-mage, or other being of great power may have fashioned a fortress of solitude to avoid prying eyes.

Q - Always night, always spring. Dark, but warm enough for fungus to grow. This is harvested by the population of various sverfneblin republics, who can live on the surface, under the starlight, rather than underground. In turn, the sverfneblin are hunted and preyed-upon by quaggoths, grimlocks and troglodytes.

S - The huge, verdant ocean, home to whales that grow to lengths of 100 yards or more, and plankton blooms bigger than a country. Zaratan naturally also float these seas.

T - Frigid seas where it is always day but always winter. Here there are gargantuan jellyfish the size of islands - cold, vast intelligences floating eternally in the light of the sun.

U - Seas where it is always winter and always night. Permanently frozen. A place where there is almost no life except deep on the sea floor where unknown things cluster around ocean vents. Here, where there is no light and no warmth, are the palaces of the yuguloths.