Moshir and the Symbiant Class

I've been doing some more thinking about the Fixed World. (At some point I will also think up a better name for it than this.)

In the North West of the map is a series of islands where it is always winter and always dawn ("C" on the map). 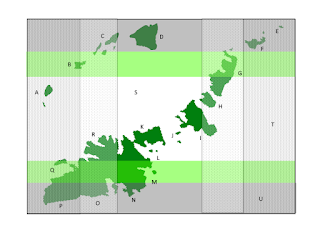 This is described in my notes as:

A group of islands where it is largely always winter and largely always dawn. Surrounded by semi-thawing pack ice. The seas are home to roving, warring tribes of merrow, who hunt seals and group together on the ice. The land is populated by stone giants, to whom the resident human population - eskimos or paleosiberian types - owe fealty. Little grows except lichens and molds (yellow mold, russet mold, etc.), oozes, jellies, and so forth. Some human tribes have symbiotic relationships with these creatures, and allow them to grow on their flesh.


I am keen on developing both these islands and the small continent to the East (marked "D"), in large part because I am obsessed with creating a megadungeon glacier, or is that glacier megadungeon?, but in small part because, well, this: 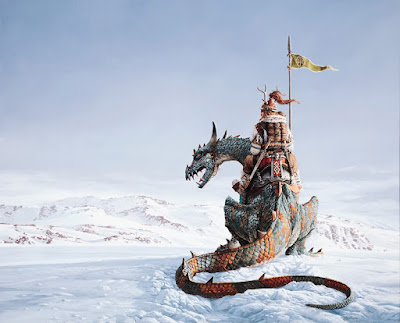 But let's explore the idea of the inhabitants of Moshir, which these islands are going to be called, having symbiotic relationships with oozes, slimes, jellies and so forth. I should first caveat this by saying that big elements of this are lifted from the now sadly long-defunct Roguelike game, Tales of Middle Earth, which may very well be the greatest computer game ever created.

A symbiant is a human being who can charm oozes, slimes, jellies, molds and the like, and, through a dangerous magical process, enter into a life-sharing relationship with such a creature. This is usually done through allowing the life form in question to enter his or her orifices.

A symbiant has d6 hit points and uses the magic-user level progression chart. His prime requisite is CON. He advances in fighting ability and saving throws as does a cleric.

Symbiants have the following abilities.

Level One: Symbiants can cast the special spell, charm ooze, slime or jelly. They can memorise, and cast, this spell once per day. The function is identical to a charm person spell, but acts only upon primitive life forms.

Level Two: Symbiants gain the power to turn oozes, slimes and jellies in a manner similar to a cleric.

First, the symbiant must have charmed an ooze, slime or jelly and have it in his thrall. He then casts the share life spell, and allows the life form to enter him through the mouth, nostrils, and so forth. (Or eats it in the case of a mold.) This process takes one day. The symbiant must make a saving throw vs poison if the life form has a number of HD equal to or greater than his number of levels, with a cumulative -1 penalty for each HD beyond his number of levels. If this saving throw fails, both he and the life form die.

Level Nine: The symbiant gains all the special defences and resistances of his life form.