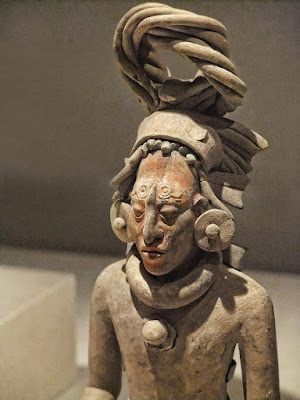 The bored young dilettantes of the Unremembered City undertake all manner of activities with their unbounded leisure: dancing, playing sport, experimenting with mind-altering substances, engaging in sexual or intellectual pursuits of all possible varieties - and also fighting. War provides them with the excitement and risk which all the young openly or secretly crave.

But their warfare is highly ceremonial. It is subject to many careful circumscriptions and rules which are subject to complex negotiations before the fight. Naacal warfare, isolated within a lonely city marooned in the middle of a vast ocean, has become ritualised and complex. Killing in combat is considered vulgar, and open murder has accrued all manner of religious taboos; the taking of life must be done through a magical or religious ceremony rather than through the distasteful method of physical combat. War is a matter of capturing opponents to secure ransoms or sacrificial offerings, or merely to settle arguments.

Naacal warriors are exceptionally skilled in the use of bolas, nets, clubs, lassos, whips, staffs and grappling. They have an additional +1 AB in those circumstances. They have a -2 penalty to their AB if using a weapon in combat which is typically used to kill (i.e. edged weapons, maces, etc.).

Naacal warriors are restricted from killing their enemies in combat by all manner of ancient taboos. If a Naacal warrior takes the life of a another being in combat, he considers himself cursed. From that point onwards, the player must roll a d20 alongside all other dice rolls. If the number on the additional d20 is 20, the 'main' dice roll automatically fails. If he takes another life in combat, the same applies but rolls of 19-20 on the additional d20 automatically negate the 'main' dice roll. If he takes another, rolls of 18-20 negate the 'main' result. And so forth. These effects are permanent.

Nothing prohibits Naacal warriors executing captives once combat is over. They may also deploy magical and religious rituals to do so. By eating some of the flesh of an executed captive and carrying out other rituals (described by the player if desired) which take 1 hour, the Naacal warrior may either:

a) 'Steal' a single spell which was in the memory of the executed captive, or a spell-like ability, randomly determined by the DM - it may be cast once whereupon it is forgotten forever;

b) Adopt a single specified characteristic of the executed captive such as its language, voice, magical or elemental resistance, etc - this lasts for one day.

Experience levels, AB and so forth are as a fighter in the main LoTFP rules.