A Woeful Picture: The Shadow by Jeff Butler (?), Reviewed

There is a prima facie case to be made that the Shadow is an interesting, even frightening, monster. A non-corporeal entity comprised only of darkness; something that was once a person but which has been cursed to spend eternity as a literal shade of what it once was, and to spread that curse as far and wide as it can. You can spin it into something akin to a vampire, or something akin to a zombie plague, or really anything in between.

You can even get a little excited about how you could give effect in your campaign to the slightly cornball antics suggested by this:

[S]hadows do not hoard treasure. In fact, such earthly baubles only help to remind [them] of their former lives. Instead, the furious undead throw all the treasure they find away, in the same location (often at the bottom of a well or deep pit) where it is out of sight...

[S]hadows appear to have been magically created, perhaps as part of some ancient curse...When victims [of Shadows' attacks] can no longer resist...the curse is activated and the majority of the character's essence is shifted to the Negative Material Plane. Only a shadow of their former self remains on the Prime Material Plane, and the transformation always renders the victim both terribly insane and undeniably evil... Fortunately, shadows rarely leave their lairs, and a bold party wishing to rescue a lost fighter or wizard should have plenty of time to venture forth and recover their friend...

But then your eyes stray upwards to the accompanying art, and there the excitement ends: 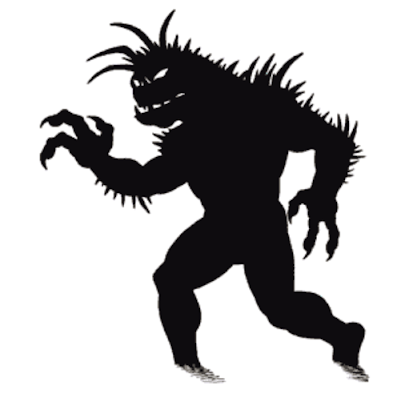 Is this the worst piece of D&D art ever drawn? It is possible. Admittedly the poor execution is really not helped by the design of the 2nd edition Monstrous Manual, which did not provide for the possibility of backgrounds for the pictures - just a stark autopsy-table kind of whiteness entirely unsuited to presenting the creatures in a bestiary. But even granted that, why does the withered and sanity-blasted undead remnant of a once living human being, now existing only in darkness, look like it has just stepped out of Gold's Gym having downed a nice whey protein shake after a particularly vigorous chest-and-arms night? Why is he all spiky and clawed? Where does it say in the text of the entry that as well as shifting the victim to the Negative Material Plane, the curse also turns them into a Warhammer Orc? (Sorry, 'Orruk'.) Above all, why does it look as though Jeff Butler (for I assume it is he), tasked with drawing an illustration for the Shadow entry, just took a reject from his scrap paper pile for some other entry (Orog? Ogrillon?) and filled it in in silhouette with a black felt-tip pen?

One can picture him at his desk, 4pm on a Friday afternoon, colleagues waiting downstairs to head off down the boozer, hastily scribbling, perhaps with the tip of his tongue sticking out of the corner of his mouth like a 6 year old doing some colouring-in. "Hold on a sec, guys, I've just got to finish off this last one for Zeb!"

The picture is neither scary, not interesting, and it does not evoke a reaction except for mild derision. Good bestiary art makes you want to use the monster in your game. This image provides you with no inspiration for how to do so, and it is impossible, looking at it, to envisage it doing anything much at all. It's an ugly black thing with claws. And that is all.