What do you say we lighten things up around here and talk about abstract mapping?

Diaspora has an interesting approach to combat, which would work equally well with D&D - indeed any game system you can think of with a bit of tinkering. I've been tinkering with it. It goes something like this:

When combat looks likely, the DM draws a map, and then divides it up into zones. Zones are not a grid, and do not represent strict distance. Rather, they represent a combination of space, ease of travel, view, and time to pass through. Thus, an open field might be one zone, but a nearby cottage with three rooms might be made up of three separate zones, because the time it takes to sprint across the open field is the same as the amount of time it would take to move between rooms cluttered with furniture. Likewise, a thick forest full of boulders might be divided up into three zones, whereas an area of light woodland of the same "size" might just be one zone - representing the speed with which one can move through each area.

With me so far?

If there are borders between zones (a hedge, a wall, a ditch, a door) these have numerical ratings indicating how long it takes to pass through them. So a hedge might have a rating of "2", indicating that it takes 2 "zones" worth of effort to cross over. (You can climb over in the same amount of time it would take to cross 2 zones.) This is called the "pass value".

Each turn, the player gets one zone of movement and an action. The zone of movement might consist in eroding pass value (e.g. getting half way over a hedge with a pass value of 2), or opening a doorway (e.g. eroding an opening value from 1 to 0.) The action would be the usual sort of thing (cast a spell, attack, whatever). Or he can give up the action to make two zones' worth of movement.

A turn is however long it would take to cross a zone. This means that combat can scale up and scale down to suit the situation. A fight taking place in an area covering a square mile of countryside, or taking place in a few rooms in a hotel reception, would follow exactly the same pattern - it's just that the zones would represent different levels of abstraction. The zones in the former would probably be bigger by area on average, and a turn would be longer (maybe two minutes in the former as opposed to around 10 seconds in the latter). But the rules are exactly the same. Only two things would really change. First, the larger the zones and the longer the turns, the more abstract attack rolls (the attack roll would represent a period of maneuvering and trading blows), and the smaller the zones and shorter the turns, the less abstract attack rolls would become (the attack roll would represent literal single attacks). The other thing that would change would be pass value. A hedge separating two open fields, each about 100 square yards and represented by a zone each, would perhaps have to have a higher pass value than a hedge separating two small gardens of 10 square yards each. 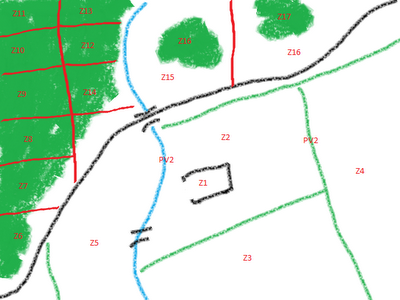 Here, the open spaces are fields and easier to cross than the woodland areas, so their zones are spatially larger. The stream and hedges have a PV (pass value) of 2. The barn in the middle is its own zone, full of bales of hay. Red lines indicate zonal boundaries; green lines are hedges; blue is the stream; the black line is a road.
Posted by noisms at 02:10