I have a fascination with all different kinds of games. This blog is mostly about RPGs, but I also play a lot of wargames, some board games, and, especially, card games. Card games are, of course, very different from RPGs on many levels, but they have one deep, shared, philosophically important characteristic: without randomness they are nothing; indeed they are shit. With RPGs the randomness comes from the dice, with card games it comes from the shuffle and draw, but the principle is exactly the same. Indeed, I don't think it is too much of an exaggeration to say that card games and RPGs are basically the same pursuit: reacting to randomness. In this, they say something very profound about the nature of our lives. Yes, I'm being serious (mostly).

But I digress. What I really wanted to talk about was Hanafuda. Hanafuda is a Japanese card deck whose design is based on the months of the year; there are 12 suits, one for each month, each containing 4 cards. It looks like this: 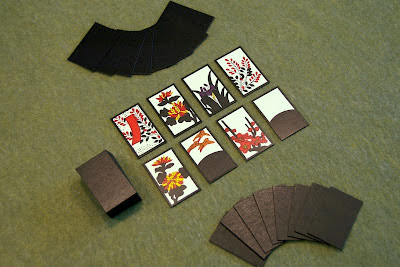 Each suit is comprised of, usually, two "normal" cards, a "ribbon" card (either red or purple) and a one "special", though this varies slightly from suit to suit. The "specials" are as follows:

These are, as you can tell, very evocative in character.

One day, I plan to come up with a system for using Hanafuda cards in an RPG. I have a number of ideas, but one is the Seasonal Random Effect Device.

Here, each month in game time the DM or one of the players would randomly draw a Hanafuda card from the relevant suit for that month. If the card drawn is "normal" there is no effect on the game. If the card is a red ribbon, this has some positive blanket mechanical effect - perhaps, for some reason, magic is especially strong due to some motion of the cosmos, and all saving throws versus magic are at -1 for the duration of the month. If the card is a purple ribbon, likewise, there is another blanket mechanical effect which is negative - for example, maybe the weather is particularly bad (either oppressively hot, or unseasonably wet) and consequently everybody is weak and lethargic and function at an effective -1 to STR. Whatever.

If a special card is drawn, it means that at some stage during that month something related to that card has to be thrown in to the game by the DM. For the Cuckoo, this might mean that some ally or henchman of the PCs will turn traitor. For Military Camp Curtain, some sort of military event might take place. For Butterflies, it might mean that some major social event happens. For Boar, maybe some mighty spirit Boar will be spotted in the forest. This should be seen as something for the DM to riff on, rather than something fixed.

This would add a lot of flavour to an Asian-flavoured fantasy game. Something similar could also be done with the European Tarot deck and more European-style fantasy games, particularly, I think, Pendragon or Ars Magica.
Posted by noisms at 23:10