The Seaside Town that They Forgot to Bomb: On Psychic Distance and Victims of the New 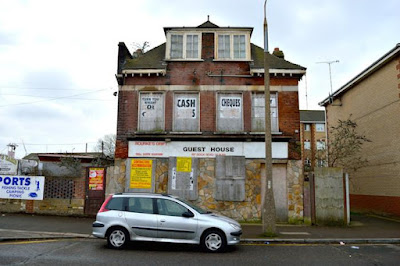 I had occasion to spend the afternoon in Hartlepool today for reasons it's best not to go into. Christ, that place is bleak. I wouldn't say anything more derogatory about it than that (a word beginning with "s" and ending in "hithole" springs to mind) because, let's face it, there are parts of my home town that could easily be described that way, and it always gets my back up when people who don't know the place say bad things about it. Also, we arrived literally seconds after this happened, causing us to have to take a massive diversion through possibly the worst part of town (the kind of place where people have horses in their living rooms and litter all over their front lawns), so I may not have seen a representative sample of the delights the town has to offer.

(There's also an argument to be made that I have a strong and unfair bias against the place after Hartlepool survived in the football league at Tranmere's expense last season, with our former manager at the helm too - the twat. But I digress.)

It is bleak, though. The main street by the train station was just shuttered-up shop after shuttered-up shop. About the only places that were actually open and had people inside were hair salons (I always see that as a bad sign). It was bitterly cold and windswept, with gloomy grey clouds permanently overhead - the kind of Northern English town which seems to be encased in tupperware. It also feels like it's miles away from anywhere: hived off from Middlesborough and Sunderland, which are themselves isolated enough in the grand scheme of things. It's hard to think of a place that is more psychically distant from the trendy multicultural hipster boom-town that the rest of Britain currently presents itself as.

I got thinking about psychic distance and cyberpunk. One of the best pieces of literary criticism I've ever read - which is blessedly short and to-the-point - is Bruce Sterling's introduction to William Gibson's collection of short stories, Burning Chrome (which I would still argue is probably Gibson's best and most cyberpunk-ish book). I've mentioned this before, but Bruce Sterling makes the great and true argument that what makes Gibson's stories so good is that they are not about the elite, but the down-and-outs - the people who are the victims of technological change. Sterling, if I recall correctly, uses the phrase "the victims of the new". That has always resonated with me: The Victims of the New. Gibson was doing something special in shifting the focus of science fiction to them, the forgotten people who get fucked over by what we (nowadays) would recognise as globalisation and post-industrial technological advancements which render their talents and livelihoods obsolete.

What's odd about this, though, is that cyberpunk after Gibson ended up morphing itself into a genre which was very much to do with big cities. Metropolises like Tokyo, LA, London. Possibly Blade Runner is to blame for this, but it isn't at all realistic when we look back at the previous 40 years in the history of the developed world. Big cities are still vibrant, and growing more so. Young people want to move to them, tourists visit them on city-breaks, they're full of bearded tattoo-festooned glasses-wearing intensely-relaxed types with lots of disposable income and occasional jobs as app designers.

The victims of the new aren't really in big cities - except for the occasional ghetto. They're in places like Hartlepool, Grimsby, Fleetwood, Barrow-in-Furness, Margate, Blyth, and Rhyl. Middling-sized places that once relied on a certain industry which no longer supports any jobs and which have been hollowed-out and decayed as a result. Places where family units have been ripped apart, where the schools don't educate the kids, and where the council doesn't have enough money to keep the street-lights on at night. These are the kind of towns that are the proper subject of relevant cyberpunk games nowadays.

I sometimes fantasize about writing a retroclone of Cyberpunk 2020, or just a cyberpunk game in general. If I did, I think it would be vastly more interesting for the PCs to be people in places like Hartlepool who refuse to be Victims of the New - who are using technology to fight, win, and/or steal for themselves and their families and communities a life. I could call it the Anti-Heroes of the New, maybe.

(*I didn't take the photo on this entry and I don't know where it is, but it could be anywhere in a psychically distant corner of modern Britain.)
Posted by noisms at 06:04