What does an impossibly ancient crocodile's memory look like? 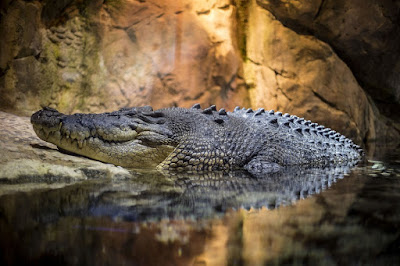 At some point memory becomes mixed together with imagination. There is a vast literature on witness evidence in criminal trials and how unreliable it is: this seems to be because, as soon as something becomes a memory it both divorces itself from what actually happened and also becomes more deeply entrenched. The more frequently you "remember" it, the more it crystallises in your mind, but what is crystallising is generally not the truth. Moreover, memory is in a sense recursive: you don't remember everything that happened in your life in chronological order - it is all jumbled up into segments which sort of loop on themselves (so that you replay certain vivid memories over and over and over again, but completely forget other things).

There is no reason to suppose that an impossibly ancient crocodile's memory is not the same: a vast and disorganised jumble of things which are probably more than half-imagined, and in which patterns can be discerned within the chaos - recurrent themes which emerge from time to time, which are never the same but sometimes alike.

Of course, there is an eon of memory in there, which means that "what is in the crocodile's memories" is near infinite: the product has to therefore contain some large tables of random inspiration as well as encouragement for a DM to be as free and creative as he wants to be. The whole thing also doesn't have to specifically be a dungeon - there could be huge hex-map wilderness areas in the crocodile's memory as well (which perhaps themselves contain dungeons....which in turn contain huge hex-map wilderness areas...which in turn themselves contain dungeons.... and so forth unto infinity). But here are some ideas for recurrent themes, anyway:

Primordial ocean: storm-wracked seas, broiling heat, strange proto-monstrous lifeforms from obscure and long-dead lineages thronging the water, archipelagos of islands poking through the surface (filled with the speculative imaginings of a crocodilian about what could be beyond the beaches and riparian landscapes; speculative imaginings made real by false memory....)

Floating cityscapes: coastal communities from long-dead civilizations glimpsed by the crocodile as it traveled the seas, and formulated in its mind into what ever on earth a crocodile would imagine a city to be like: presumably infinite? Presumably beyond the coast such cities could go on forever and ever as far as the crocodile knows?

Ice: the crocodile has lived through not just one ice age but others - it has seen huge expanses of glacial blue extending from one horizon to another, and seen icebergs the size of islands floating, crewed by God knows what beasts lived in those places in those days....and those beasts are not as they were but as the crocodile falsely remembers and imagines them.

Desert landscapes: when the crocodile traveled up rivers at the time of mankind's birth it found proto-human clans scratching a living from the sub-blasted landscape, and it remembers those people, but not as they were - rather as they have become entrenched in the corridors of its mind through repeated recursive imaginings.

Does this make sense to anybody? I hope it does.