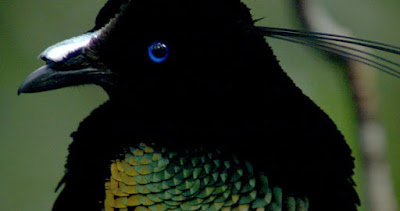 In the lowland forests of Sepik there are many tribes of bird of paradise men, of colours and shapes as multifarious as the flowers of the jungle. They are intelligent, powerful, and brimming with an avian ferocity which is only outdone by their vanity. Their aggressive territoriality and absolute arrogance prevents them cooperating beyond groups around 100 strong.

When creating a tribe of bird of paradise men, generate their type and abilities as follows:

Roll d6 times for colours for males of the tribe, once for females:

Roll once for tail length or other ornamentation for males of the tribe (females have ordinary tails):

All bird of paradise men can fly (180) and have a natural +2 bonus to AC. They typically arm themselves with blow pipes and clubs, and wear hide armour.

In a village, there will be around 6d10 warriors, 6d10 females, and 6d10 children. They will be lead by a Big Man with an extra HD who is married to half of the females; the other females are married to individual warriors, with the leftover warriors being bachelors.

One in ten females is a shamaness (druid or cleric) with d3+1 levels.
Posted by noisms at 02:40