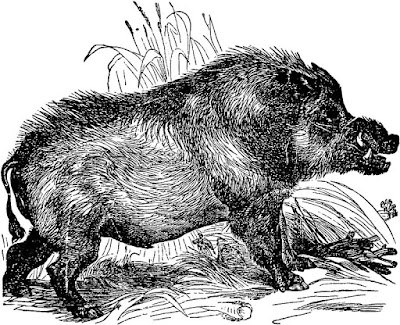 The pig-faced man-eating orc is so much nastier than the green-skinned kind, and what's more, he's more real with it:

"A 56-year-old woman has been eaten by pigs after collapsing in their pen, Russian media report. After venturing out to feed the animals in a village in the central Russian region of Udmurtia, the farmer reportedly fainted or suffered an epileptic seizure. Her husband later found the body. She reportedly died of blood loss. Their farm is in a village in the Malopurginsky district of Udmurtia, east of the city of Kazan. Local media say the husband had gone to bed early the day before as he was feeling unwell. After waking to find his wife missing, he came upon her body in the pen."(https://www.bbc.co.uk/news/world-europe-47161035)

"Authorities are investigating how a farmer in the US state of Oregon was devoured by his pigs. Terry Vance Garner, 69, went to feed his animals last Wednesday on his farm by the coast, but never returned. His dentures and pieces of his body were found by a family member in the pig enclosure, but the rest of his remains had been consumed." (https://www.bbc.co.uk/news/world-us-canada-19796224)

"A pig attacked and seriously injured a man less than two hours after the same animal attacked his wife at their Massachusetts farm. [...] Police and emergency responders were called to the farm Tuesday evening for a report of an injured woman. When they arrived, they found a 38-year-old woman with severe lacerations on her body from an apparent pig attack. She was taken to a hospital for further treatment. Less than two hours later, rescuers were called to the same location for a report of a man who had received more serious injuries from the same animal soon after returning from the hospital where he'd gone with his injured wife. [...] The pig's teeth severed a major artery in his arm and he almost bled to death, says CBS Boston." (https://www.cbsnews.com/news/pig-attacks-husband-and-wife-on-their-massachusetts-farm/)

"The reported ferocity of wild pigs (Sus scrofa) is legendary (Blansford 1891, Ricciuti 1976, Wilson 2005). Being capable of tenaciously defending themselves against natural predators and conspecifics, this aggressive behavior among wild pigs has also been documented to include attacks on humans under a variety of situations (e.g., including both hunting and non-hunting circumstances). Images of such attacks were depicted on prehistoric cave paintings (e.g., at Bhimbetaka, India) as early as 50,000 years BP (Kamat 1997). These incidents were described in writings produced in both the ancient Greek and Roman empires (Ricciuti 1976). Fatal wild pig attacks on humans were recorded on headstones in the Severn Temple graveyard in England dating back to the 12th century (Severn Temple 2004). In the Western Hemisphere, accounts of such incidents date back to 1506, when introduced feral pigs were reported to have often attacked Spanish soldiers hunting rebellious Indians or escaped slaves on islands in the Caribbean, especially when these animals were cornered (Towne and Wentworth 1950)." (From JJ Mayer, "Wild Pig Attacks on Humans", Wildlife Damage Management Conferences - Proceedings 151 (2013), Introduction - available here: https://digitalcommons.unl.edu/cgi/viewcontent.cgi?article=1150&context=icwdm_wdmconfproc)

"A boar left on the pasture, at liberty with the sows, might suffice for thirty or forty of them; but as he is commonly shut up, and allowed access at stated times only, so that the young ones may be born at nearly the same time, it is usual to allow him to serve from six to ten—on no account should he serve more. The best plan is, to shut up the boar and sow in a sty together; for, when turned in among several females, he is apt to ride them so often that he exhausts himself without effect. The breeding boar should be fed well and kept in high condition, but not fat. Full grown boars being often savage and difficult to tame, and prone to attack men and animals, should be deprived of their tusks." (R. Jennings, Sheep, Swine and Poultry (1864), para. 264.)

"The rigid avoidance of this failing of bad temper in a boar is advisable not only because this quality is almost invariably hereditary, but a savage boar is a continual source of danger to man and beast." (S. Spencer, The Pig: Breeding, Rearing and Marketing (1919) p. 58)

"Shining with sweat, I began running uphill in wellingtons - a feat usually beyond me - and decided to cut through the pig paddock to get to the fields leading to the lane. As I scrambled down the mental gate into the bare earth of the pigs' enclosure I saw, out of the corner of my eye, Freda's clothes entangled with a row of pink pigs, lying like sausages in the packet.

"I can tell you what the end of the world looks like. In a circle around you everything dissolves and melts so that you know that life is an illusion, a pretty screen over the eternal expanding chaos of the universe. For one terrifying second I thought that the pigs had eaten Freda." (J. Lewis-Stempel, Meadowland: The Private Life of an English Field (2015), p. 152)

"'Always remember this about pigs, Jahn,' [my grandfather] says, and suddenly jabs one pig in the ear with a spade. There is a grunt from the recesses of time, from the primordial swamp, as the pig bites at the shovel. Poppop retracts the shovel, bends down and points at the blade, swivelling it slightly so it catches the morning light. The pig has left gashing teeth marks in the steel. My grandfather is a man of few words but actions speak louder. Any animal that can leave bite marks in steel can bite off a human limb." (Also J. Lewis-Stempel, Meadowland, p. 153.)