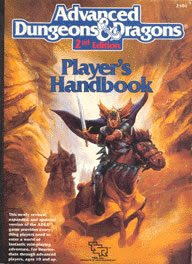 Due to another of Zach's recent entries, I came across this old rpgsite thread, which was the result of a Best/Worst RPG ever survey carried out on those forums. There are various ranking permutations worked out in the first post, but the most persuasive interpretation of the votes (number of 'best' votes - number of 'worst' votes) resulted in the following "bottom ten" table, number 1 being the worst game of all time:

Do you notice anything odd about that? I do. Namely, AD&D 2e patently isn't the worst RPG ever. It really isn't. You might not agree that it is the best (and although it is my favourite, even I don't think of it as the best), or even that it is very good, but come on... the worst? How do we account for this abnormality?

Mostly, it is to do with the fact that 2e was the most played version of the game, and it thus draws the most ire from the people who dislike D&D generally; it is likely to be the version they are most familiar with. That's unfair, but understandable. However, some of the negativity must also be put it down to the the tendency among a sizeable portion of old schoolers, bemoaned in a recent thread at dragonsfoot, to what essentially boils down to Intellectual Perversity (as opposed to the sexual kind). That is, irrational hatred on the part of 1e AD&D fans for a game which is 99% similar to their favourite. Intellectual Perversity of grognards, how do I love thee, let me count the ways:

These in and of themselves are perfectly acceptable reasons (however irrational) for disliking 2e or preferring 1e. But they hardly qualify as reasons to believe it the worst game ever, given that the two editions are so similar.

The root cause of this grognard hatred is, I believe, snootiness. 1e came first, and moreover was written more or less for adults. 2e was a jonny-come-lately with aspirations to appeal equally to both adults and older children. That sort of thing bothers people of a certain disposition, who fancy themselves mature and intelligent and above childish pursuits, and thus the edition war was born. Personally I prefer certain aspects of 2e to 1e, but I like the older edition and would never vote it the worst rpg ever, or even call it a bad one.