Yesterday I went hiking in the remote Tarset Valley, in Western Northumberland, close to the Scottish border. This is genuine back-of-beyond country by English standards; although it's only two hours' drive from a major city, to get there you have to drive for what seems like forever along windy, single-lane roads crossed by sheep and cattle; every half a mile or so you have to get out of your car to untie a gate to get through to the next section of road. The landscape is stunningly beautiful but swarming with midges which flood the car the second you open your door and spend the rest of the day merrily sucking your blood.

Anyway, up there in at the head of the Tarset Valley are a number of "Bastles", of which Black Middens is the best preserved and easiest to find. A bastle is a type of fortified farmhouse; prior to the Act of Union in 1707 the Anglo-Scottish borders were a wild, lawless area ruled over by powerful mafia-like families of "border reivers" who raided each other for sheep, cattle, and to maintain blood-feuds. Bastles were places of refuge for farmers who were under attack from reivers: on the raising of the alarm, it seems, everybody would gather all the livestock they could in the ground floor and then climb up to the first floor to mount a defence - often pulling up a ladder behind them to prevent enemies coming up. 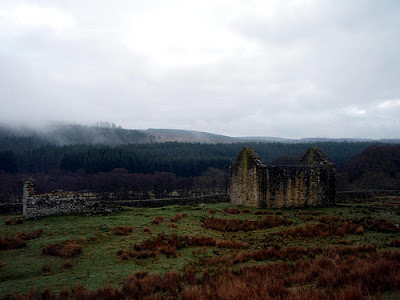 Even in its present condition Black Middens feels incredibly robust and well-built; the walls are probably two feet thick and you can well imagine lightly-armed raiders would have no hope of hurting anybody inside. Further on up the valley across overgrown meadows there are more bastles which are in a much more ruined and overgrown state, and which is harder to envisage as places of fortification, but there are gruesome stories nonetheless about beheadings and kidnappings at these remote locations. 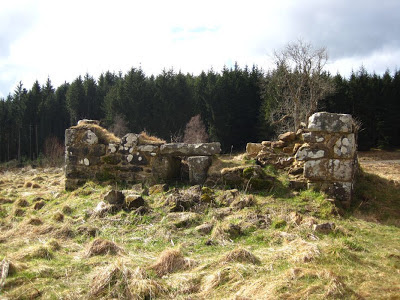 Anyway, you could bet that peasants in a given fantasy setting would be a damn sight more keen to build such fortifications than even those in the border country of times past. Next time you create a village for a game of D&D, remember this post and think to yourself: if I was a peasant in a world where there were orcs, griffins, not to mention adventurers, what would I do to protect what was mine?