A method for randomly generating poisons that I drew up this morning. This takes its inspiration from Table 5.1 in the 2nd edition AD&D DMG, though is extensively rejigged. In the 'effect' column, the first effect is on a failed save; the second is what happens after a successful save. (It never made any sense to me that a successful save should be "no effect" - something tells me that if you get stung by a box jellyfish you know about it even if you survive.) 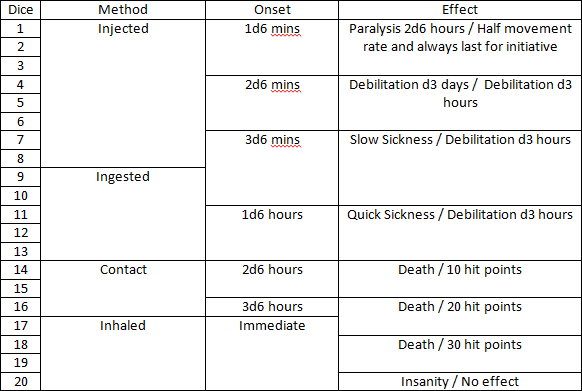 Paralysis: The character is completely immobile and loses all control over his muscles. He is, however, flexible, and can be moved around as required.

Debilitation: The character is critically weakened by excruciating pain, lethargy, or horrible bowel movements, though not in such a way as to prove life-threatening. All the character's ability scores are reduced by half with adjustments to AC, to hit rolls, etc. made as necessary. Character moves at 1/2 movement rate and always acts last in the combat round. Character does not heal lost hit points during the period of debilitation.

Slow Sickness: The character has a long-lasting illness that gradually saps his strength through vomiting, diarrhea, swelling, etc. Character loses 1 point of CON every day for 2d6 days. If his CON is reduced to 2, he dies. If the 2d6 days expire and he still has a CON score, he regains CON at a rate of 1 per day. All the effects of debilitation apply for the 2d6 day period.

Quick Sickness: As above, but the illness is more severe and sudden in its effects. Character loses 1 point of CON every hour for 2d6 hours. If his CON is reduced to 2, he dies. All the other effects of slow sickess apply.

Death: The poison causes cataclysmic seizures, brain haemorrhage or equivalent effects which are impossible to survive. Character dies within d6 minutes. On a successful save the character loses the number of hit points stated over the course of d6 minutes, but survives if he has hit points remaining.

Insanity: The poison alters brain chemistry, permanently. Roll a d4 to determine insanity type: 1 - Narcolepsy (must save versus poison at the start of combat; failure means the character falls asleep); 2 - Paranoia (CHA reduced by half); 3 - Multiple Personalities (PC develops a second personality; each day toss a coin to determine which personality is in control that day - each personality has no memory or awareness of what happens when it is dormant); 4 - Lunacy (PC becomes utterly deranged and is under the control of the DM as an NPC).
Posted by noisms at 19:20