Random Tables as Tools to Compress and Communicate Information.

Let's think about random generators. What makes a good one? On A Gaming Podcast About Nothing a few episodes back I made the rather banal observation that while the contents of a table are important, what you really want is interaction between columns. This is obvious to anyone with half a brain.

But let's demonstrate anyway. As said, what follows is probably obvious, but it is also interesting. 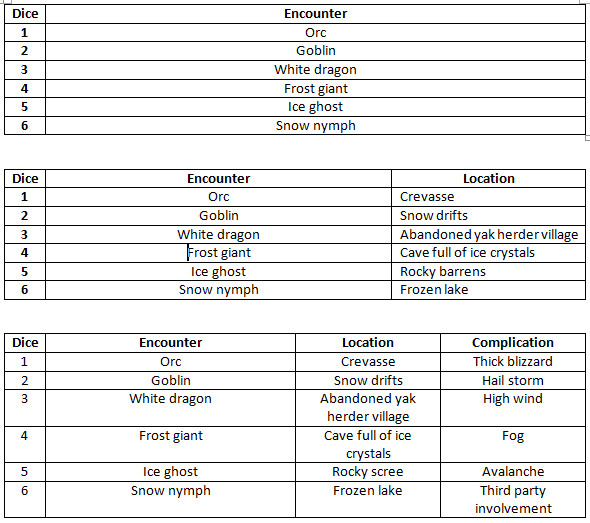 The first table gives a bog-standard result. A random encounter with one of 6 possible monsters. The second table is more interesting, because it gives a combination of results through the interaction between columns: 36 possibilities. It's richer. And the third table is richer still: 216 possibilities.

Now, at the most superficial level that provides more variety, which is probably a good thing, all else being equal. Variety is nice. It avoids repetition. But let's drill down a little.


Random tables, then, are little packages of concentrated usefulness. They hold compressed information and creative power and release it with great efficiency when called upon to do so by the rolling of dice.
Posted by noisms at 06:03