In a comment on the previous post, Zak made the fair observation that it's probably more useful to point at good examples of RPG writing to follow, than to simply suggest that people ought to try harder at being better.

So let's cite some examples.

By now, some of you creative types are thinking "Hey, why not just crash into Internet's mainframe and delete my bill each month?" And we'd be disappointed if you didn't think it... But let's put it this way. You know how tough Arasaka's Tokyo Main is? Well, Arasaka still pays its monthly bill to Internet.

This, from a sidebar on a page about paying to use the Internet, is good RPG writing because it manages to communicate so efficiently what a game of Cyberpunk 2020 is all about. First, the game rewards creativity on the part of the players. Second, it assumes player agency: if players want to hack into Internet to delete their bills, they can do this, and the referee can and should facilitate it. Third, there are going to be consequences. Cyberpunk 2020 takes the grown-up attitude that along with agency comes risk as well as reward. Forget the archaic language and ideas (the real "Internet" is the opposite of a monopolistic corporation; internet bills will presumably be trivially expensive in the real 2020), and love or hate Mike Pondsmith's writing (I love it, personally), it's a great way to build an implied setting and implied style of play.

You will play the roles of all the monsters, townspeople, and other creatures encountered. The best Dungeon Masters are able to play several  roles at once - such as when the characters meet another party of adventurers, all played by the DM!

However, your  creatures are not as detailed as the PCs, and are easier to play. Their actions are often determined by dice rolls. One rule applies to all the creatures, even though there are many different types: Imagine how the creature feels.

The actions of a creature are often determined by its Alignment or Intelligence. For example, an animal is not very smart, and will act  very  simply - hungry  and hostile, neutral and unconcerned, or friendly. More intelligent creatures may be thinking of many different things;  food, treasure, home and friends, and so forth.

When an encounter seems likely, think about how the creatures feel, and how they might act. When the encounter begins, you will often roll dice to find the actual reactions of the creatures. The results should be adjusted for the creatures’ intelligence, habits, and other details.

Imagine how your creatures will react to these dangerous, greedy characters stomping around the caves! The monsters will try to survive and be happy in their own ways, and will often fight to defend their homes and treasures.


This is on more-or-less the first page of the DM's book from the Mentzer Red Box. I think it's interesting, not to mention refreshing, that pretty much the first bit of DMing advice the 10- or 11-year old target audience would encounter. It's basically saying, use your brain. Be thoughtful. The DM's job is to make the game world a living one: it's not just to set up a dungeon with stuff in it to kill, but to set up a world full of things which behave in a deep, believable, internally consistent way. And consider the tone Mentzer uses. He knows he's writing for children and adolescents, so he writes in a very clear and breezy fashion, but nor does he talk down to the reader. He respects them enough to say: be clever. 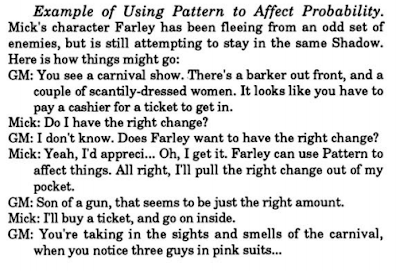 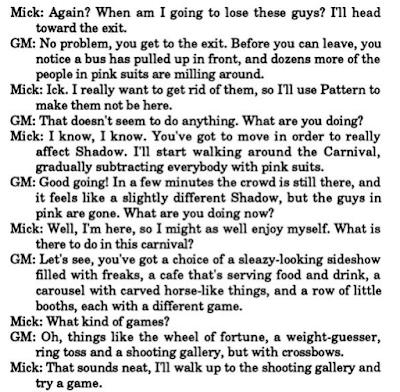 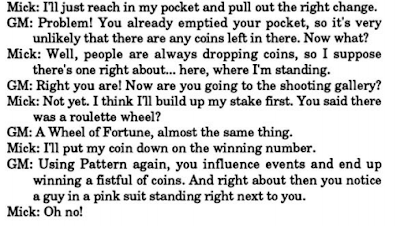 And the illustrations are good. There may be a slight artifice in Mick saying "Oh, I get it, Farley can use Pattern to affect things" or "I know, I know, you've got to really move to affect Shadow", but it's a necessary and useful technique to demonstrate to the reader what can be done by an Amberite in the game. And the GM's questions and comments are perfect ("What are you doing?" is a constant refrain in all Wujcik's examples, and that's more or less always the most appropriate question for a GM to ask). I particularly like how this example shows (not tells) how to keep things moving, keep things interesting, keep things alive. He never lets Mick rest on his laurels: there's always a new problem. The world doesn't sit still and wait to react to the actions of the players. It's active. The actors within it have initiative.

What do these examples have in common? Difficult to say, but I suppose at root what I like about all of them is that they treat the reader with respect. Cyberpunk 2020 and Amber Diceless would both reasonably be expected to have an older audience and are written with that in mind: there's a lot that's simply implied and the reader is expected to catch up. Basic D&D spells things out a little bit more but that's because it's written for children, and I think it strikes the perfect note in guiding without any sense of being patronising.
Posted by noisms at 04:29