Paradigmatic D&D, Or: A Verbeeg, Grell, Ankheg and Orog walk into a bar...

I don't think it is controversial to say that one of the great side-effects of the creative flowering that is the OSR is what people have done with settings. Whether it's Corpathium, the Swordfish Islands, Centerra, HMS Apollyon, Straits of Anian, the implied setting of Deep Carbon Observatory or Carcosa, wherever you look people are redefining what a D&D setting is "supposed to" look like in new and interesting ways.

And yet. And yet. I feel a deep and abiding longing when I flick through the AD&D 2nd edition DMG, Monstrous Manual, or BECMI Rules Cyclopedia, for the many worlds - all unique and yet all so very alike - which DMs have created and run for their groups down the decades and which all drew from that same soup of basic ingredients: elves in the forests, dwarves in the mountains, storm giants and golden dragons, grell and illithids, gnolls and ettercaps, ankhegs, thri-kreen, githyanki and mimics. We are free from the tyranny of generic D&D world building nowadays, but like an old Bulgarian man who looks back at his youth and feels a sense of unjustified nostalgia for how things were under the Communists, so I can't help but sometimes think there is an eternal charm in the implied settings of the 1980s. Running a game in a simulacrum of Mystara, as so many people did, is to be free from the pressure or need to be interesting. The melange of cultural influences which together comprised "D&D-land circa 1987-1994" are like a comfortable, warm blanket to swathe yourself in; a big, bland, cottage pie to eat; a pint of John Smith's at the pub; a song by The Beatles. It isn't particularly interesting because you already know it intimately, but it is wholesome and enjoyable for all that.

Like most RPG bloggers, I am guilty of overcomplicating things at times. I am on an apparently unending quest to try to do something new. That has its virtues, but I can't help but feel overwhelmed by a yearning for the simplicity of yesteryear sometimes. Or, to put it another way, the enduring naff-ness of the Keith Parkinson image below calls to me in a way that is more than a little embarrassing but cannot be denied. 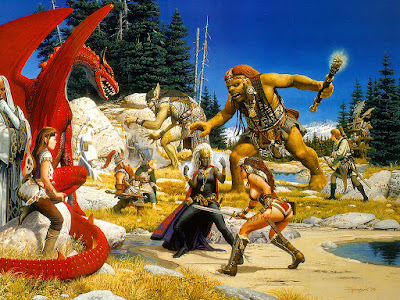