The Tree Megadungeon and the Mythic Upperworld 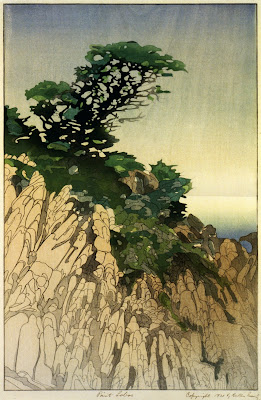 About this time last year I had the idea of creating a megadungeon inside a gigantic tree. For some reason today that idea came back to me, spiraling up out of the mists in my brain. I started thinking about the burrows in the roots at its base, and how you could invert the traditional way of doing things and start your PCs off down there, in civilization, ready to explore their way upwards. You could call this, "The Mythic Upperworld". To the people living down in the soil underneath, the tree up there is an alien place of verdant life, light, sap, wind, water, and strange green and brown fecundity. To them in their shadowy, dank, dark world a place of danger, adventure, and legends they are too cowardly or conservative to verify. (This is where the PCs come in.)

What sort of city would exist in the roots of this place? Where would the PCs begin their campaign? I picture a society made up of quiet, furtive things at home in damp loamy soil. Myconids and mold men, of course, but also a variant of the drow - loam elves, you could call them - pale, maybe even blind, hateful of the sun. Creeping spidery things, like neogi and ettercaps. Hook horrors and umber hulks kept as slaves or pets to dig tunnels and fend off enemies. All thing which hate the light green living world above, but who thirst for knowledge of it and its treasures.

To a neogi or loam elf living down in the Great Root City, what would the leaf canopy miles above represent? Heaven, or hell? An abode of the gods, or devils? Most likely the latter. Most likely the green cloud far above would represent fear, hate, danger, misery, death. The top of the Mythic Upperworld, like the bottom of the Mythic Underworld, is simply an infinite abyss. I like the thought of PCs reaching the top of the tree some day and discovering that all the stories they have heard in the Great Root City are mirrored precisely in reverse up there - because for the dwellers in the canopy, hell is all the way back down.
Posted by noisms at 04:22