Lay a Little Egg for Me 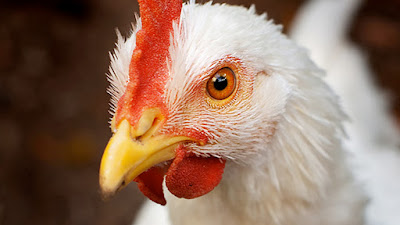 Today we visited some friends in the countryside who keep, among other things, chickens. They have a flock of about a dozen of them, and the birds are free to roam across a large corner of an orchard which must be very close to chicken paradise: nice cool shade from the trees with a few spots of sun here and there, all the food and water they can drink, lots of grassy areas to roam around in, and shelter from the elements.

But chicken paradise, it turns out, is actually something close to HELL: a dystopian nightmare of viciously and vigorously enforced social hierarchy from which nobody can escape, characterised by unprovoked and brutal beatings, theft of food, sexual assault, and constant unrelenting low-level bullying and violence.

Animals do not have morals. But even within that context, chickens take amorality to the extreme.

They are also probably the scariest non-dangerous-to-humans farmyard animal. They are, to all intents and purposes, miniature velociraptors, and the link to the dinosaurs is absolutely transparent and clear as soon as you spend any time watching them - the only thing they really lack is teeth. The chickens at my friend's farm spent most of the afternoon stalking and catching flies through areas of long grass in their little domain. Watching them doing this was like a case study in efficient predation. Those flies had no chance. Each chicken was like a T-rex, striding back and forth with constant twitching head movements until it fixated on a fly landing on a blade of grass, whereupon it would dart its head forward with such speed that not even a blue bottle could escape. It wasn't hard at all to imagine what the results would be if those birds were 8 feet tall and became interested in the taste of human flesh. They would be ruling the planet within months and we would be laying eggs for them.

I missed a trick with chickens in Yoon-Suin. Our modern domesticated animals are descendants of the Red Junglefowl, a wild bird whose range almost directly maps to the regions of the world which were its geographic inspiration. I should have done something with that. In a fantasy setting, a race of chicken-men could be like orcs: a being with a society that prioritizes only selfishness, where might makes right, and where the only respected value is the pecking order - literally.

HD 2+2
AC 5
#ATT 2
DMG 1d4/1d6 (peck/gouge)
Move 180
ML 7
*Chicken-men can fly clumsily for up to 60' but need to land and then rest for 3 rounds afterwards.
*Chicken-men attack with a peck and a gouge from a taloned foot. They can instead sacrifice making those attacks in order to either:
1) Use both feet to trample and pin a human-sized-or smaller opponent to the ground; if they hit successfully they pull their target to the ground and pin it. This does no damage but in subsequent rounds the chicken-man can peck the head, doing 2d4+2 damage. The chicken-man will let go if hit and wounded.
2) Buffet with the wings. This hits any enemy in a semi-circular arc in front of the chicken automatically, doing 1d2 damage.
Posted by noisms at 03:09