The Mountain to the Moon

I may have written about this campaign setting idea before; I'm not sure. The elevator pitch is straightforward: it's a mountain that goes all the way to the moon. Hence: 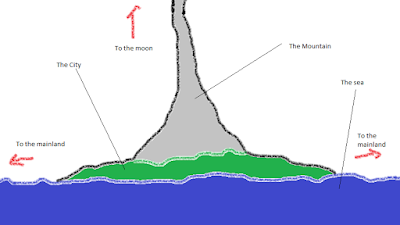 The mountain was built by an advanced civilization - the Naacals* - to escape the apocalypse then overtaking the world in which they lived. This was no apocalypse of lack, but one of plenty - a sudden flourishing of flora and fauna that became so fecund and monstrous that life, sheer natural life, overwhelmed civilization, except on one island which managed to maintain its defences. Here the mountain was erected and the Naacals ascended through it to the moon, to live in safety and isolation for ever more.

But not all ascended, naturally - only the aristocratic elect - and they made sure to prevent anybody coming up behind them. They withdrew a metaphorical drawbridge by filling the mountain with deadly traps and guardians. Those left behind were forced to make do as they could, and they created a city around the base of the mountain in which to live. The seas around the island protect them and sustain them, and over the millennia they have fashioned a new civilization of a kind.

The mountain exists as, of course, a kind of megadungeon - it is networked by a vast labyrinth of tunnels filled with the decaying traps and mad sentinels left behind by the Naacals, as well as treasures and technological artefacts abandoned on the way. There has grown up around the mountain a vast quasi-religion of myth and ritual that has prevented general exploration but which is circumvented or ignored by a secret guild of explorers/adventurers who venture into its depths and share their discoveries. The guild is secretly sponsored by curious members of the nobility and magic-users who occasionally purchase what it uncovers, whether through academic interest or because they believe it will aid them socially or in other, more nefarious ways. The PCs are members of the guild, natch.

At the same time there is also a mainland across the sea - a world which is filled with danger but one which, possibly, might once again harbour human life for anyone brave enough to colonise it. The PCs could try that, just as they could try to get all the way up to the moon - but they would need to be pretty powerful in order to do so.

[*The Naacals are also a major element in Behind Gently Smiling Jaws. I have it in mind to create a "Naacal Trilogy" of loosely-related campaign settings, which may or may not be on the same world in hugely distant eras.]
Posted by noisms at 02:11