Like I suppose a lot of people do, I have a romantic feeling for islands, particularly small ones. I think this has three roots. First and most obviously, all of us (some more so than others) have fantasies from time to time about being able to retreat from the world and live in splendid isolation from its worries and woes, and life on an island promises this. Second, there is something attractive in the idea that, in living on an island, one could eventually come to know its entire geography and contents intimately, so as to extend a sense of homeliness and familiarity - of ownership, even - over everything on it. Third, there is simply something inherently beautiful about island views and island life; whether a sandy atoll in the aquamarine of the Pacific or a windswept rock in the grey North Atlantic, an island almost invariably comes with a picture-postcard aesthetic that is hard to resist.

An island, or a small archipelago of islands, is also a great location for a D&D campaign. It's a confined territory that PCs can come to know in detail relatively easily - which always makes for a richer experience for both DM and players. It's an isolated territory, so that it can "plug and play" into almost any wider setting, or simply have no relationship to an outside world at all. And it's a small territory, so it provides a framework in which to give player choice real consequence; they're not going to want to piss off that tribe of orcs who live on the other side of the island, because those orcs are going to be able to figure out where the PCs live pretty easily, and there's going to be nowhere to run when they do.

There are 187 permanently inhabited islands in the British Isles, so there are plenty of examples to choose from, but I think the best has to be St Kilda. St Kilda can not only lay claim to encompassing all the virtues of a small archipelago of islands as outlined above. It can also very probably lay claim to being about the most interesting place of its size in the world. 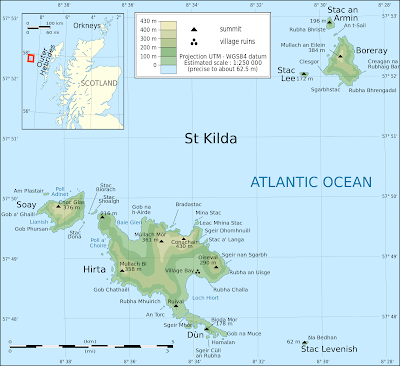 It has neolithic sheepholds dating back to 1850 BC. It has a ruined house of an "Amazon" who supposedly lived on the main island in prehistoric times. It has a ruined fort that was supposed to have been built by the Fir Bolg. It is covered in neolithic cleitan - small rock-built bothies for storing and preserving items (including, surely, magic ones) on a treeless island. It has an empty medieval village (which is, surely, haunted). It has feral sheep who are thought to be the remnants of the earliest domesticated sheep in Europe. It had a system of paying rent with seabirds. It has a name that is not actually that of a saint (except maybe it was). 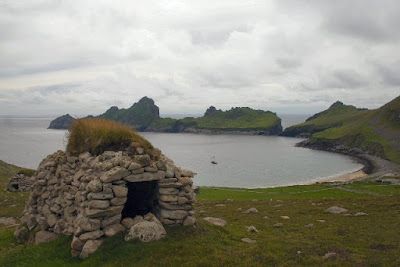 Above all, it also has sea-stacks, cliffs that look like faces, and landscape features to die for. I loved this line from Baxter and Crumley's St Kilda: A Portrait of Britain's Remotest Island Landscape, cited in the wikipedia entry:

[St Kilda] is a mad, imperfect God's hoard of all unnecessary lavish landscape luxuries he ever devised in his madness. These he has scattered at random in Atlantic isolation 100 miles from the corrupting influences of the mainland, 40 miles west of the westmost Western Isles. He has kept for himself only the best pieces and woven around them a plot as evidence of his madness. 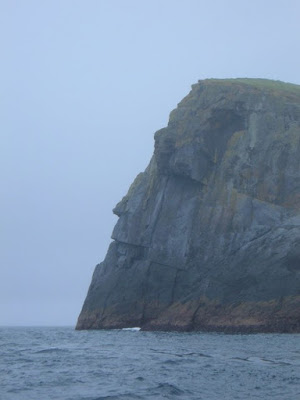 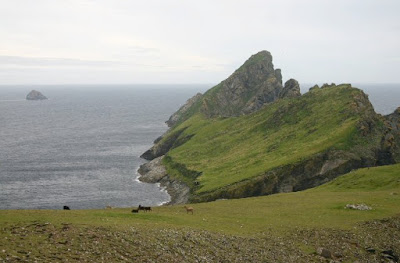 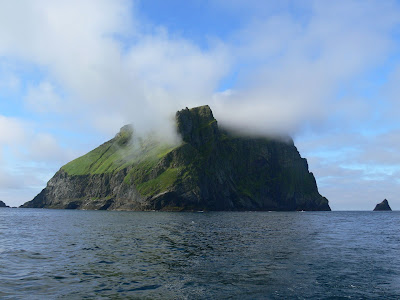 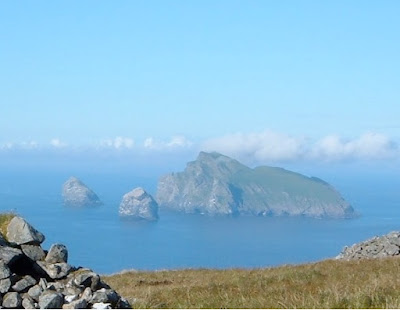 Add a thriving village with some interesting NPCs, a dragon, a giant, a few orcs, some pirates, a mad archmage's tower, a hermit druid and an entrance to some variant of the Underdark on one of the islands and you're good to go for an entire year-long campaign. 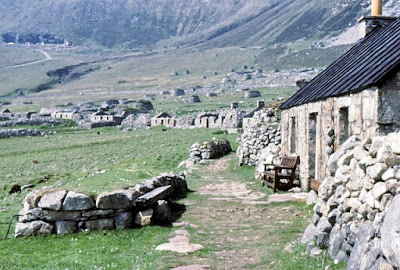