On RPG Hobbyists and the Didactic Mode

The latest Bundle of Holding campaign is for Blue Rose. I am not one of those people who has anything against Blue Rose in particular. I am actually totally on board with the idea of a fantasy RPG which is about being the good guys - and I will quite happily admit that I have a real soft spot for romantic fantasy and for the artistic style of Blue Rose range: 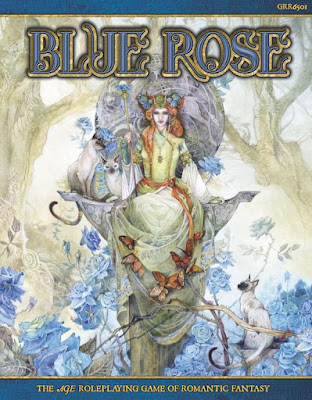 I mean, I like sinister cats and weird uncanny-valley-inhabiting androgynous fae beings and creepy butterflies and flowers. I am all about those things.

I also completely understand the appeal of:

“[A] style and a point of view that’s generally positive, hopeful, and cooperative: good people can make a difference, true love can and does win in the end, we can make the world better, people of good conscience can work together (and even disagree) but still coexist peacefully, and, ultimately, there is good in the world and it’s something worth fighting for. That romance often includes interpersonal relationships, from boon comrades to passionate love, and such things are both the reasons why characters take action and the rewards they receive for their efforts." [from an interview with the Lead Designer, here.]


But where I part ways with projects like Blue Rose is the didacticism. It's the idea that it isn't sufficient to just create a product that takes inspiration from romantic fantasy literature or that is inclusive; one also has to teach people something:

"I think it’s remarkable that, in this day and age, even mature adult gamers won’t blink at games and stories that model the most terrible forms of violence, but become sheepish and embarrassed by stories modeling love and friendship and family, especially when tabletop roleplaying is such a social activity. While Blue Rose will most likely (we’re still in the design phase) have some game mechanics to support those relationships, my best advice to gamers is to balance a regard for everyone’s comfort level at the game table with a willingness to perhaps reach beyond that comfort zone for something that can be a powerful story element that has been missing from games aimed at telling legendary or mythological stories: the notion that love and connection are powers as great, if not greater, than any magic, any battle-prowess, or any cunning scheme." [from the same interview]

In other words, it's not enough to just have fun playing a game - the players have to "reach beyond their comfort zone" and, the implication goes, learn something about the importance of love, connection, and so on and so forth through play.

Why is it that RPG designers feel that they have to do this - to prove that what they are doing is about more than just playing a game? That there has to be a didactic element to what they're creating? What is wrong with it just being for fun?

I wonder if it is the vestiges of that protestant work ethic, with its strong roots in the Puritanism that found its roots in the New World, which feels as though there is something base in enjoyment for its own sake, and insists that fun can only be fun if there is an element of work or self-betterment involved? Or is it just a manfestation of the insecurity of somebody of an artistic bent who frets that they are not doing something more important? Either way, it lends Blue Rose the unfortunate air of the closing sequence in a 1980s children's cartoon series, a Thundercats or a Dungeons and Dragons or a Defenders of the Earth - yes, didn't we all have fun fighting the baddies and setting off lots of explosions, but more importantly, didn't we also learn something about friendship? Cue millions of children throughout the land rolling their eyes and switching channel to ITV; the creators of Blue Rose might want to ask themselves if that is the mood they really want to capture with the product they've invested so much time and creative effort in.
Posted by noisms at 21:22