The Most Gameable Ghibli Film 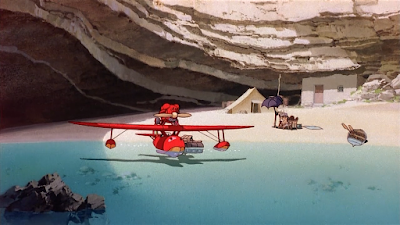 Ghibli is in the air at the moment (yeah, yeah, I know, Patrick, Soft D&D is not really supposed to be RPG Ghibli). It coincides with me revisiting some of the old Ghibli classics in recent weeks. Last night it was Porco Rosso, or 紅の豚, to give it its proper title, and it struck me while watching it that, of all Ghibli films and settings, it is probably the one in which I would most enjoy setting an RPG campaign.

The film's story takes place in what is effectively the setting of Black Lamb and Grey Falcon - that strange combination of time and place, the Adriatic between the Wars, coated in a halcyon glaze but caught between a dark past and a bleak, threatening future, like the space which opens up between storm clouds on a summer's day to let hazy golden light gleam through. Sun-bleached beaches and hidden inlets and islets on the Dalmatian coast; deposed nobles and royals from across Europe drinking vermouth or cognac in hotel bars; women enjoying the first flush of newfound liberty; men unsuccessfully escaping grim military pasts; jazz music; spies and outlaws rubbing shoulders; laughter in the air above a background whisper of impending doom. Europe's last hurrah before its final frenzy of bloodletting, made worse because everybody knew what was coming, knew what it would be like, had experienced it first hand, but did it all over again anyway.

For all its sense of loss, it is a time and place which one would like to visit and inhabit. Miyazaki clearly would, anyway. His portrait of it is affectionate, even loving. (And it is one he revisited with similar occidental enthusiasm in The Wind Rises.) The Adriatic has surely never looked much more idyllic on film, and everybody who lives in it - even the villains - seem to share a bond of camaraderie that cannot be easily untied. There are rivalries; there is violence; but there is, above all, fun. This is a setting you really want to explore, full of big personalities who you want to get to know over cocktails. It is the Mediterranean as it can only be imagined by an optimistic Japanese man who by nature sees the best in everything.

What would PCs do in this picturesque setting? Hunt down 'sea plane pirates' in their secret lairs, or become pirates themselves. Escort cruise ships or cargo vessels. Get paid to search for spies, or to spy on others. Protect former soldiers from others wanting to settle old scores, or perhaps get involved in the settling of scores themselves. Maybe, if you wanted to get supernatural, they could pursue rumours of ghosts haunting the battlefields of the Balkans - or perhaps search for ancient Roman burial sites or attempt to track down monsters from folklore or myth. And all of it with sea planes - natch.
Posted by noisms at 18:58