When I was about 10 or so a friend of mine came to school one day with a book he'd got from the local library. It was something called The Fellowship of the Ring, and it was by the same person who had written The Hobbit. My friend told me it was good, and I remember being spellbound by the cover, which seemed to hint at something beautiful, sophisticated and strange: 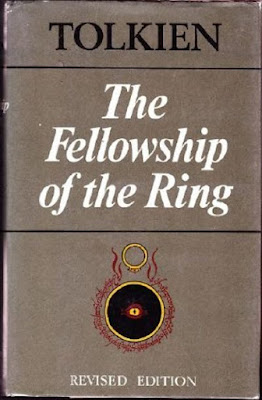 The problem was, my friend had borrowed the only copy from the library, and I didn't have the money to buy it for myself. So I did the next best thing and borrowed what I was told by the librarian was "the sequel", The Two Towers, instead.

I sometimes wonder if this unorthodox way of coming to The Lord of the Rings is what resulted in it having captivated me ever since. There are certain advantages to coming to a series in the second or third volume, rather than the first. Usually, you'll begin in media res, for one thing, giving a feeling of being swept along in the narrative right from the start. (That's certainly the case with The Lord of the Rings; you couldn't get a more different experience to the sedate, extended opening to The Fellowship of the Ring than starting off at the top of the Falls of Rauros with Aragorn hunting orcs.)

But really, the value of reading a series of books this way is how it stimulates the brain. Second volumes contain little infodump, forcing the new reader to fill in huge gaps in her knowledge with her sheer imagination; they are full of hints and allusions to what came before, the meaning of which can only be the subject of wild speculation; they require the reader not just to imagine, but also in part to create her own version of whatever "Volume I" contained. What is more, they require her to keep this alternative conception, this through-the-looking-glass version of the first part of the story, constantly updated because of its contingency on new information uncovered in the course of reading the sequels. Who is Aragorn? You start off The Two Towers with first on idea, then another, and then another again, and, lacking a clear idea of his origins, you have to mould and shape the person you understand him to be in your mind as you read. If anything, this exercise makes you more engaged and focused than you would otherwise be; you have to work at piecing together the puzzle - like a detective story for the imagination.

I haven't made a habit of skipping first volumes, exactly, but my experience with The Lord of the Rings was borne out by jumping in at the deep end with series such as The Many-Coloured Land, Sorcery!, the Night's Dawn trilogy, a few of the Moorcock series, and other relatively mediocre fare that have been much enlivened by the exercise. The next time you see a multivolume epic fantasy series sitting on the shelves of your local bookshop or library, give it a whirl and launch yourself into things halfway through. You may find yourself being pleasantly surprised.