So What Is Behind Gently Smiling Jaws? 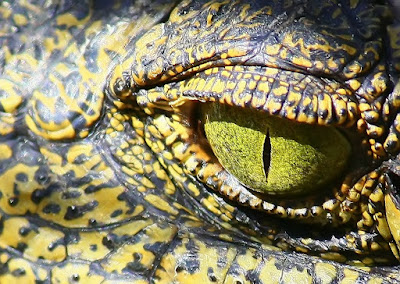 A project which has been through so many iterations I've long ago lost count, but which is now whittled down to its bare essence - a mere three volumes of densely packed stuff. The ambition is that these volumes will be contained in a single slipcase out from which it will feel sensually exciting to slide them.

The "elevator pitch": an immortal crocodile, born before the dinosaurs, slumbers in a lost lake. To preserve their own immortality the members of the original human civilization, the Naacals, entered its memory palace. Later, other interlopers came as well. But then the contents of the crocodile's dreams began to seep into the world outside, the real world, until the seeping became an explosion and modernity was swept away. We now find ourselves in a distant eon after the crocodilian apocalypse - with humanity having long ago reconciled itself to survival on a planet, and in a reality, that has been radically and irreversibly altered by its encounter with a reptilian mind.

Volume I - Dusk in the Unremembered City allows one to construct one's own version of the Unremembered City, the home of the Naacals - an island many dozens of miles across, which has been floating for so long that many of its regions have gone back to wilderness and many of its inhabitants have retreated into madness. The city itself gains its name because it is the only region of the world (and possibly now of the universe itself) that does not derive its essence from having been remembered by the crocodile. The PCs are barbarians - "native" human arrivals come to make their fame and fortune in the great city, the original city, the city where civilisation was born.

Volume II - Noon in the Remembered World allows one to map regions of the post-apocalyptic Earth and populate them with the memories and fantasies of the crocodile and the Seven Who Entered - and the remnant barbarian human polities who have come under their sway. The PCs are members of those barbarian petty statelets, or Young Naacal adventurers and explorers, making their way in a world remade.

Volume III - Dawn in the Crocodilian Apocalypse is an investigative affair in the vein of Unknown Armies or Call of Cthulhu. The crocodilian apocalypse is upon the world of 2022 (or 1982, or 1952, or 1922, or whenever you prefer), but nobody yet knows it. Nobody indeed knows anything, except for a very small set of eccentrics, conspiracy theorists, outcasts and weirdos who have begun to notice that the fabric of reality is fraying, and very strange things indeed are leaking out through the gaps....

I will expand on what is meant by all this in future posts.