On Adventure: Risk as Its Own Reward 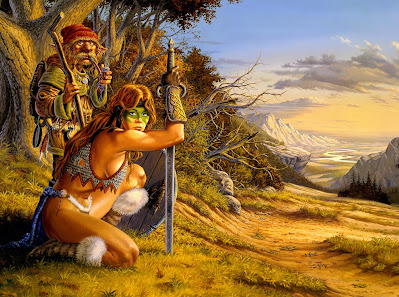 There is a great deal to be said for thinking of D&D PCs as, essentially, glorified tomb-robbers - adventuring to gather treasure and hence XP. Indeed, if the 'OSR' can be boiled down to any single principle it is probably this one: if you create a dungeon and/or hexmap and populate it with troves of treasure then the game thereafter more or less runs itself. The players have every incentive to explore and the DM basically just watches them go. (Anybody reading this blog will almost certainly consider that observation to be old hat, of course.)

There is a lot less to be said in my view for thinking of D&D PCs as going out and Saving the World, either literally or in microcosm (Saving the Village), primarily because it places too much of a burden on the DM, but also because it ends up depriving the players of agency. With all of that said, these objections are largely a matter of taste, and I don't doubt that many people have fun playing D&D in this way, running this type of campaign.

These two different ways of playing D&D, which we can very roughly divide into 'old school' and 'new school', result in very different outcomes at the table in my experience, but they do have one thing in common: they postulate largely extrinsic motives for adventure. In the former, the PCs adventure because they want to get gold and hence XP and hence advance in level. In the latter, they adventure because, well, they want to be the heroes of something resembling a high fantasy novel or film; they want to Do Good in the world.

Neither does a very good job of capturing the fact that adventure often has an intrinsic motivation - that it is indeed something worth doing for its own sake, and which therefore is its own reward. (Nobody who has travelled anywhere even slightly off the beaten track can possibly dispute this.) In fact, achieving this kind of mood or vibe may be among the hardest things to do in the RPG hobby; however much D&D's art might channel that kind of feeling, the fact is that at the table very few DMs are capable of doing so and very few players are capable of allowing them to.

By definition, fiddling with the XP system to incentivise exploration - something I have toyed with in the past - cannot be the answer, because that simply returns us to the world of extrinsic motivations for adventure. The only true method must be precisely by making adventuring in a campaign setting intrinsically appealing - in other words, something worth doing in its own right, irrespective of the extrinsic rewards (such as treasure) that might be available.

Creating such a world is probably the holy grail of anybody toiling over their own precious Fantasy Hearthbreaker setting, though I think only Tolkien's Middle Earth - and maybe Jack Vance's Gaean Reach - comes anywhere close.