In my earlier posts about the 'Fixed World' setting I described how, in the part of the world where it was always afternoon and always summer, you would get a kind of uber-rainforest: a jungle with trees the size of skyscrapers, full of giant insects and and exotic civilizations. Recently I've been thinking, why not go the whole hog? In those jungles, trees aren't just the size of skyscrapers: they are the size of mountains. There are vast distances separating one from another. And as a consequence you could base an entire campaign around the exploration of one, vast, tree megadungeon. Viz: 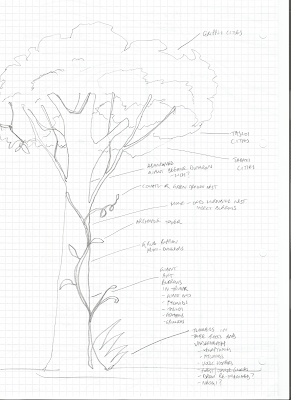 At the base of The Mahogany Dungeon are entire dungeon levels-worth of burrows, inhabited by vegepygmies, myconids, hook horrors, jungle gnomes, and similar. I also thought about re-imagining drow to inhabit such dark places in the vast root structures beneath such a tree: a race of dark-dwelling, mysterious elves who raise spiders and fungus, like an unholy mixture of Warhammer forest goblins, Drizzt, and Curupira. Neogi would live down there too with their umber hulk companions, trading slaves from root tunnel to root tunnel.

Further up the trunk, if the PCs had the equipment to climb, they would discover giant ant burrows in the bark of the tree which comprise newer and more dangerous dungeon levels. Some of these burrows would house the original inhabitants - giant ants of all kinds, some peaceful leaf-cutters; other ferocious raiders. Some would be abandoned and taken over by tasloi and grimlocks lurking in the depths and living off sap - or myconid civilizations with vast populations meditating away from the light of the sun. Here also there would be mini-dungeons formed by giant insect grubs, perhaps now housing wyverns, flying serpents, human cults, ettercaps, or were-jaguars.

As they climbed higher, the PCs would encounter huge vines with outgrowths stretching out into the great abyssal gulf of open space. On the huge, smooth, green leaves might be towers of archmages, nests of couatl or green dragons, or gloomwing egg clutches full of tenebrous worms.

Further up still would be massive holes carved into the trunk of the tree by birds such as giant hornbills - the rocs of the jungle. Their nests would be labyrinths of dirt, moss and twigs to be explored, populated by ravenous giant lice and fleas - maybe even intelligent flea-people dwelling in the stinking half-light. And there there would also be giant beehives which, when abandoned, would become inhabited by those seeking secrecy and protection - liches, demons or millennial sects.

Finally, though, higher-level PCs or expert climbers would find their way to the canopy, and the sunlight. Up there, there would be entire tribes of grippli, tasloi, tabaxi and other intelligent jungle beings - and humans too, of course, living in tree-house towns spread between branches, twigs and leaves. Wars fought and lost, trade networks spanning from one branchtip to another, and the sun shining down on it all eternally - except for the mighty rainstorms which would swell from the sweltering air every 24 hours, thus marking the passage from one day to the next.
Posted by noisms at 04:06