How I Run Sandboxes in the City, Part I: The Setup

Non-linear game play is not the preserve of fantasy gaming, and a sandbox does not require a hexmap. This sort of game can take place in any setting, in any genre. I'm running such a game at the moment: it's a totally non-linear, sandbox campaign of Cyberpunk 2020 set in Liverpool, or "Cyberpool" as it has come to be known.

It occurred to me recently to write a series of posts on how I've gone about running this, and here is the first: The Setup.

If you are a player in my game and would not like to see "behind the veil" and thus realise that I am in fact no Wizard of Oz but a mere conjuror, stop reading now.

In setting up Cyberpool, I sat down and created three things that I consider indispensable:
Then, with the help of the players, I created the icing on the cake:
Let's take a look at these in turn.

The Big List of NPCs exists in the form of an Excel spreadsheet. At the beginning it contained approximately 30 NPCs, each with a Name, a Profession, a Description, and a Motive. Every time the PCs encounter somebody in the game and have an interaction lasting longer than a few sentences, that NPC goes into the list. It's now 63 entries long.

I think of this as being akin to the hexmap that you might draw when starting off a typical D&D-style sandbox campaign. Rather than having a number of hexes filled with adventuring locations, you have a web of NPCs who will, if you like, provide the stuff of adventure.

This is a more complicated, bespoke version of the Mr Jones Mission Generator. It is 20 entries long. I can roll on it at any time, and instantly come up with a link between two NPCs (if, for instance, I come up with "A pimp" "needs to" "kill" "a local businessman" I can within 10 seconds find that pimp and businessman on the Big List of NPCs and create a link between them. It's then a matter of a few more minutes' thought to come up with a backstory for the pair and why the former wants to kill the latter, drawing on their different motives and descriptions). Sometimes, if the mood takes me, I create a new NPC for one of the results and add him/her to the Big List of NPCs.

This is what you draw on when the PCs go out looking for work. If they know some of these NPCs, then work might come looking for them.

This is similar to the Big List of NPCs. It's a collection of organisations present in the city, each with a Name, Type, and Description. Sometimes the Random Mission Generator generates results that necessitate referring to this list - other times I use the list when I need to elaborate on the backstory for NPCs.

This is the final piece of the puzzle. In our first "chargen" session, I sat down with the players and we created a web of relationships for the PCs and the people they know. Cyberpunk 2020 has a character generation system which by necessity gives each starting PC a certain number of acquaintances (teachers, friends, enemies, family members, ex-lovers, etc.). We put the names of the PCs in the middle of a sheet of hexes, one name to a hex. We then started adding acquaintances in neighbouring hexes, again at one name to a hex. If two names came to neighbour each other, it meant the two people concerned know each other for some reason, which we noted down.

We also write down the names of other NPCs who emerge during play on this hexmap who are in some way "allied to" or at least in cahoots with this core group of PCs and their acquaintances. These, of course, also go in the Big List of NPCs. The Relationship Hexmap now looks like this: 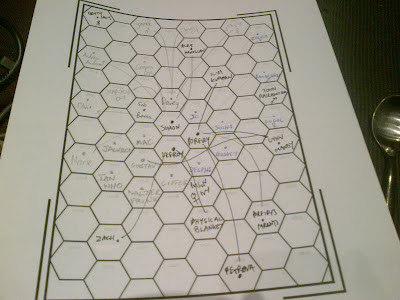 Which might be a bit confusing to you, but does the job.

These are the basic tools from which the game emerges. The next post will look at how I use them in play.
Posted by noisms at 02:32