Today I had to go through some intensive hangover recovery; this involved sitting at the kitchen table making game-related stuff, obviously. One of the projects I worked on was a resurrection of Utolso Varos, because I have ordered Reign Enchiridion and I got to thinking about what I would run with it if I had a) a regular face-to-face gaming group; b) a mic that worked so I could run it on G+; or c) time.

Anyway, I created 40 NPCs fitting for an urban sandbox and this crappy map. I have ruthlessly plundered the Hungarian language for name inspiration, because to my ear Hungarian is so completely different to English it sounds amazingly like a fantasy language. 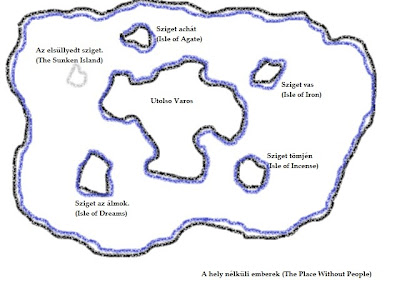 The big island in the middle is the city itself. It covers the entire island, and is the last city on earth. From my original entry:

This, as the name suggests, is the last city on earth, and mankind has retreated to it as the world grows old and fades, and life for human beings becomes hostile.

Like Nessus or Viriconium, Utolso Varos is almost collapsing under the weight of its own history. It is many thousands of years old, and feels it - it is decadent, listless, and resigned, although it still possesses a faded and elegant sort of beauty. It is situated on an island in the middle of a great inland sea, and beyond that sea is the wild, dying earth, peopled by beings wondrous and alien, and scattered with the ruins and remnants of the civilizations of aeons past.

The earth has become so old that its very existence has become tattered and frayed. Time passes slowly, and the light of the sun has become flat and dull. Alien spirits and demonic things from other realities slip through the decaying fragmentary boundaries between their worlds and ours. Those who can practice magic hoard it, as if it might protect them from the inevitable end of all things. Gradually the human race dwindles, and history turns its face away.

Beyond the sea is The Place Without People, where there are only monsters and demons and the faint remains of what once was. The people in the city have almost no idea what is out there - only a vague sense that once, long ago, the human race belonged there but now it does not. They regard that cold, hostile, vast emptiness on the other side of the sea with a mixture of curiosity and terror.