The Most D&D Non-D&D Film

I re-watched The Man Who Would Be King last night. It was an odd experience - I'd watched it long ago but mostly forgotten the details, except for a few bits here and there: the scenes of polo played with severed heads; the final, momentous bite; the water-melon eater getting thrown off the train. So as I watched I kept getting these occasional jolts of memory: "Oh yeah, I remember this!"

It's a cracking film, anyway. I don't know about John Huston's intentions exactly, but it seemed to me that it managed to do that most difficult thing - be simultaneously an entertaining story that works on its own merits, while at the same time "saying something" about the real world. It's very cunningly done, serving as a brilliant skewering of the evils, folly and hubris of colonialism, while never once allowing the viewer to dislike Peachey and Danny or want them to fail. Huston never lets the audience off the hook by allowing us to feel all warm and fuzzy about how enlightened we are nowadays. Instead he sweeps us along in the fun of it all, showing us not why colonialism was wrong, but why for so many people it felt so right. (This is similar to what Scorsese did so masterfully in Goodfellas and particularly The Wolf of Wall Street.) That's a hundred times more profound, useful and interesting than the typical approach of a weak storyteller, which is to beat the audience over the head with what he or she wants to SAY.

In a strange way, though, The Man Who Would Be King also feels like the greatest D&D film that never was. (No, don't worry, I'm not about to draw a link between D&D and colonialism here - although I daresay one could if one was so inclined.) Peachey and Danny begin as rogues, not much better than vagabonds. They're also the kind of cipher typically encountered in a 1st level PC: their goals in life are to get rich and powerful, and ultimately to become kings. And that's it. What's interesting about them is what happens now, not their back-story.

From there, they progress through trials and tribulations up the ladder from roving robbers to doughty warriors, to military heroes, chieftains, kings and even higher - mapping the progress from B and E to CM and finally I. They do the kinds of things D&D PCs do: pretending to be insane, charging into battle without a thought for tactics, robbing ancient tombs, slaughtering mooks. As they go they develop depth and character, becoming fleshed out into real, living people as opposed to a set of stats on a piece of paper with "Peachey, Level 1 Fighting-Man" written on the top. They travel to strange, wild lands full of ancient gods and temples. And ultimately they make their mark on the world - in a sense - before disappearing into ignominy. 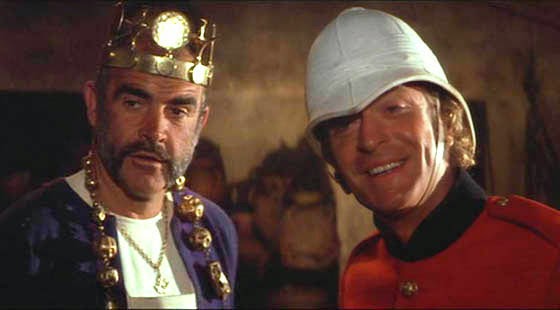 I also can't help but feel that the film must have affected me when I saw it as a kid, because there are elements of it that seem very Yoon-Suin-ish to me: the sense of variety, the general feeling of chaos and dispersal, the vistas of the Himalayas and the Hindu Kush, the strange priests and holy men chanting under their statues of weird Gods. Maybe I need to revise that Appendix N.
Posted by noisms at 05:46