He denies that he is ill, but they take no notice, kill him, and have a feast 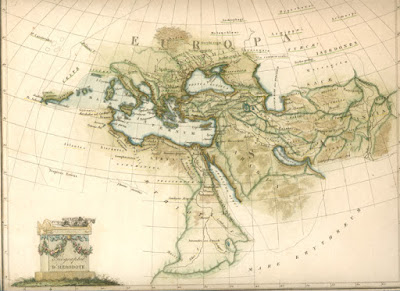 I am almost finished re-reading Herodotus's Histories, this time Robin Waterfield's brilliantly readable and gossipy translation for Oxford World's Classics. I first read it back as an undergraduate and would have enjoyed it a heck of a lot more if I'd had this version.

You could make a superb campaign setting out of the world of the Histories, taking Herodotus's stories at face value. Just the many descriptions of the tribes of Libya, Scythia, etc., would be enough in themselves:

Next to the Zaueces are the Gyzantes. Bees produce a great deal of honey in their country, but even larger quantities are produced of a syrup, which is said to be the local specialty. Anyway, all the people there smear ochre on themselves and eat monkeys, which throng the hills in huge numbers. According to the Carthaginians, there is an island called Cyrauis off the bit of the coast where the Gyzantes live; they describe the island as being two hundred stades long, but narrow, accessible on foot from the mainland, and full of olive trees and vines. On the island there is supposed to be a pool where unmarried native women use birds' feathers smeared with pitch to draw gold dust up from the mud. I cannot vouch for the truth of this story; I am simply recording what is said.

A very large tribe called the Garamantes live here... [It] is also the place where the cows walk backwards as they graze; the reason for this habit is that their horns curve forwards - so much so that if they walk forwards as they graze, the horns stick into the ground in front of them, and so they move backwards. In other respects they are no different from cows anywhere in the world, except that leather made from their skin is exceptionally thick and durable. The Garamantes use four-horse chariots to hunt the cave-dwelling Ethiopians, because the cave-dwelling Ethiopians are the fastest people of any of whom we have been brought a report. These cave-dwellers eat reptiles such as snakes and lizards; the language they speak is completely different from any other language, and sounds like bats squeaking.

Far past this rugged region, in the foothills of a mountain range, live people who are said - men and women alike - to be bald from birth; they are also supposed to have snub noses and large chins, to have a distinct language, to dress like Scythians, and to live off trees. The tree is called pontikos, and is about the same size as a fig tree... When the fruit is ripe, they strain it through cloths and extract a thick, dark juice from it, which they call askhu. They lick this juice and drink it mixed with milk, and compress the thickest sediment into cakes for eating...They each live under a tree, and wrap white waterproof felt around their trees in winter, while dispensing with the felt it summer. They are said to be holy, and so no one acts unjustly towards them, and they do not have any weapons of war. When disputes arise between neighbouring tribes, they are the ones who settle them, and any fugitive who takes refuge among them is safe from unjust treatment. They are called the Argippaei.

Rather than dying, [the Getae] believe that on death a person goes to a deity called Salmoxis (or Gebeleizis, as some of them call him). At five year intervals, they cast lots to choose someone to send to Salmoxis as their messenger, with instructions as to what favours they want him to grant on that occasion. This is how they send the messenger. They arrange three lances, with men to hold them, and then others grab the hands and feet of the one being sent to Salmoxis and throw him up in the air and onto the points of the lances. If he dies from being impaled, they regard this as a sign that the god will look favourably on their requests. If he does not die, however, they blame this failure on the messenger himself, call him a bad man, and then find someone else to send. They tell him the message they want him to take to Salmoxis while he is still alive. Another thing these Thracians do is fire arrows up into the sky, when thunder and lightning occur, and hurl threats at the god, because they recognize no god other than their own.

Another tribe of Indians, called the Padaei, who live to the east of these marsh Indians, are nomadic and eat raw meat. They are said to have the following customs. If any of their compatriots - a man or a woman - is ill, his closest male friends (assuming that it is a man who is ill) kill him, on the grounds that if he wasted away in illness his flesh would become spoiled. He denies that he is ill, but they take no notice, kill him, and have a feast. Exactly the same procedure is followed by a woman's closest female friends when it is a woman who is ill. They sacrifice and eat anyone who reaches old age, but it is unusual for anyone to do so, because they kill everyone who falls ill before reaching old age.


I fucking love this kind of thing. I'm aware of attempts to produce fantasy versions of these more gazetteerish elements of Herodotus (Ursula Le Guin's Changing Planes and Italo Calvino's Invisible Cities come to mind), but it's really very hard to top him.
Posted by noisms at 00:15