In the lobby of the Museum of Historical Interface, at the Brunswick Dock in Hibap'ȕ/Liverpool, there hangs a framed letter, printed on a material now known to be yak skin and written in the High Yellow City Trade Tongue. It is hidden behind a large reinforced glass case which prevents the public approaching closer than three yards, and has two permanent security guards stationed beside it for 24 hours a day. This is necessary to prevent its theft, many attempts at which having been foiled in the time it has been housed at the Museum. It is the only known replica on Our Side of the Rift of the infamous letter which the explorer Omswarop Chal sent to his master, the Grand Matriarch of the Ulele Clan, at her residence in the Wagtail Quarter, on returning from his first journey through the Rift, and hence its value is beyond priceless. The year 2018 represents the tri-centennial anniversary of the sending of that letter and Chal's first traversing of the Rift, and hence the first contact between Our Side and Theirs, and on January 12th the great-grandson of the Grand Matriarch will be in attendance paying a full state visit. Given that the matriarch of the Wimxhȁ clan and her extended family will also be present, it is the most important event expected to take place in Hibap'ȕ/Liverpool this century so far. [...] 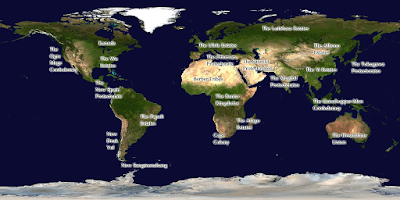