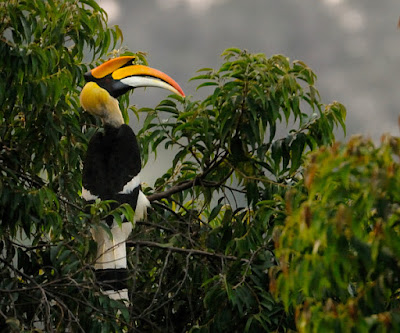 The biggest and mightiest of all the inhabitants of the Tree are a pair of rocs, male and female. Far from being beasts of legend, they are in fact the only inhabitants of the tree who can be easily seen from the ground below, flying to and from their perches in the distant high canopy on clear days (or disappearing into the clouds when it is overcast). In spring, when the female is sequestered in their nest - a huge gouge in the trunk of the Tree itself - the male can often be seen bringing her food, his wing beats making a sound like that of distant thunder or the rumble of a far-off avalanche.

The nest itself is so large, to accommodate a bird that is over 120' long, that it hosts its own small world of predators and prey: giant beetles feast on the rotting fruit refuse littering the nest bottom; giant ticks lurk in the mass tangle of the bedding, waiting to attach themselves to succulent bloody flesh; armoured lice grope about feeding off whatever filth sloughs off the bodies of birds. In the "roof" of the nest a clan of swiftlet-people build their upside-down dwellings and fight off the predations of the burrowing grubs which dwell in the wood of the trunk; at night they leave to carry out their own raids on their enemies elsewhere. And the walls of the nest are full of cracks, crevasses and crannies, where there hide ambush predators: spiders, centipedes, snakes and much worse.

Almost nobody has visited the rocs' nest; fewer still do it and return. It is rumoured that down in its deepest, dankest, dirtiest place there lives a fakir who survives off fruit and other cast-offs and pursues complete self-abegnation - and this gives him insights into the nature of reality which no other is yet to grasp.