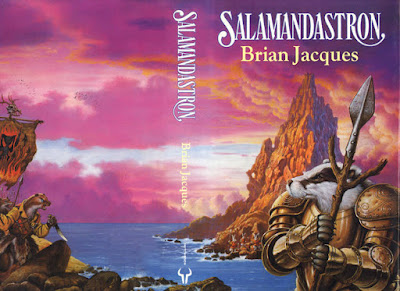 Comments on a recent post got me thinking about anthropomorphised animals. Why is it that as children we are told stories about rabbits, frogs, badgers and bears, and why do we carry this through into grown-up fantasy literature and RPG bestiaries? Why do so many of Aesop's fables feature talking animals? Why are non-humans the protagonists of so many myths and folkloric tales from around the world?

There is a reasonably large literature on this, it seems - I found a sizeable number of journal articles on it when searching earlier today. Approaches to the question vary. On the one hand, this article has a purely pragmatic perspective: we anthropomorphise animals in fiction because it is easy for children to identify with them, because we like flights of fancy and escapism, because an animal character has a ready-made personality (wily fox, lazy sloth, cheeky monkey, etc.) without any need for elucidation, and because of the potential for humour.

On the other, there are more self-consciously academic pieces which locate anthropomorphism of animals in a broader discussion of the functions of literature, reading and education.

I think the practical observations do have some bite, but this somewhat throwaway observation in the second piece I linked to seems to get closest to the mark:

When the risks and rewards are high, when the signs are ambiguous, when we are up against powerful forces, we envision human intents and actions cloaked in the shapes of objects and animals, and we act accordingly. Intuitively then, we begin to see faces in the clouds, a man in the moon, assign people’s names to life-threatening storms, and watch our investments in bull and bear markets.


This is an important observation, but it only gets us so far, Undoubtedly in situations of emotional urgency we tend to imbue both animals and inanimate objects with feelings (who hasn't hissed "Stupid thing!" at some recalcitrant tool or fiddly object that seems to be deliberately and malignantly refusing to cooperate in whatever task you want to carry out?). And we do sometimes create stories about objects too - Thomas the Tank Engine, Boris the Digger, Gwen the Carrot, or whatever. But it doesn't tell us why, and nor does it explain why children are in particular drawn to stories about animals over objects, and both over stories about other people. The authors of the piece in question suggest that anthropomorphism helps create emotional distance, allowing us to deal playfully and safely with difficult themes - for example, I suppose, by thinking of an economic downturn as a bear, or an oncoming deadly storm as Katrina. I don't think that's quite right. We want to think of a storm being Katrina or a bear market because we want someone to struggle against, to hate - not because we want to think of them in a light-hearted way.

I'm inclined to think that our tendency to anthropomorphise animals comes about because animals have a vibrancy, a certain "thinginess", to them; they are real in a way that other things are not. Partly this is because, as I've said before, we have a deep interest in, and connection with, animals that can surely only be explained by their importance to us in our evolutionary past. (Or, if you prefer, by the fact that they are created beings just like we are.) But mostly I think it is because to watch an animal go about the business of living is to watch something truly putting its all into the task in front of it. Animals never engage in half-measures - everything they do, they do for real, whether it's looking for food, mating, sleeping or playing. Their doings spark our curiosity and engage our emotions because they are vested with so much more vigour and determination than our own. This is why children respond to stories about them. And it is also why when we want to think of something monstrous, something vivid, something exciting, the minds of DMs so often instinctively go towards animal people.
Posted by noisms at 04:08