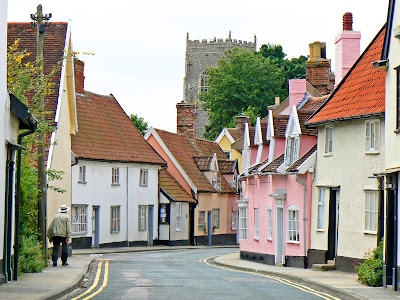 I have spent the last week on holiday in rural Britain. What this tends to mean these days, whichever county you are in (be it Devon, Dorset, Derbyshire or Dumfries) is a kind of bourgeois paradise of delightful rented cottages in picturesque chocolate-box villages full of antique shops, grand old country pubs (all of which seem to be called the White Horse, the White Hart, the Turk's Head or the Fox and Hounds), smart cafe-bars, boutiquey art galleries and impeccably preserved medieval churches and castles. I was going to say that the only difference you get between Scotland and England in this respect is that in the former there's also whisky distilleries - but you also get them in England now as well.

I love exploring my country, which manages to pack astonishing variety and regional flavour into a pretty tiny and absurdly densely-populated space. But I am always struck, when I do so, by the feeling that there is something deeply weird and possibly morally corrupting (in some sense I can't quite identify) about a billion posh people suddenly descending on picturesque pastoral locations every weekend and school holiday and transforming them into their own idealised versions of country living. And that's not to mention all those who choose to retire to such locations, or use them as second homes, or even live in them but spend all their time commuting to the nearest city. Bourgeois people running the show in urban Britain, you sort of expect, but there's something galling about them doing it in the countryside too.

Speaking to relatives (a branch of my family live in one of the most famously picturesque areas of the country), the thing that annoys them is not so much that all this enforced poshness pushes up the cost of living and particularly the cost of housing - though that does, of course, annoy them. It's that it makes them feel like outsiders in their own homeland - their own community activities and their own tastes being drowned in a sea of middle-class frivolity. Where once they had pride in their jobs, their social circles and their roots, they are now forced to dance attendance on the capricious tastes of their society's elites in order to scrape what living they can in the service industry. Nobody ever asked them if they wanted that. It just sort of happened.

Thinking about all this got me imagining a world in which elves visit human societies as tourists. Much as a modern wealthy person visits rural areas in his own country or goes on a grand tour of South East Asia or Latin America, elves - richer, more powerful, more educated - might also choose to savour the texture of life on a lower rung among the humans, so to speak. And if they did it often enough, entire human settlements - maybe entire human regions - would develop to cater to these visitors. Their economies would come to revolve around pleasing the whims of their eccentric and capricious overlords. Their local delicacies would be tweaked to suit the elven taste buds. Their young men and women would learn to exaggerate whatever characteristics the elves found attractive. They would begin producing pastiches of elven goods to make their visitors feel at home. They would all have to learn elven. They would even end up giving up their "charming and rustic" homes for periods of time so that elves could get to experience life at a different pace. They would become essentially parasitic and utterly reliant upon the elven tourist gold piece. Maybe, in time, they would lose any sense of connection with their own cultural practices, performing them rather as quanit, superficial museum pieces for the entertainment of their visitors.

The question then becomes: how does one make such a campaign setting dynamic? The possibility that first pops into my head is what happens when suddenly one day, the tourists stop coming? Now these people, who have spent generations catering only to the pleasures of the elves, find themselves horribly exposed to reality - and without anybody to protect them.
Posted by noisms at 04:24