Stone Balancing and the Upwards Dungeon 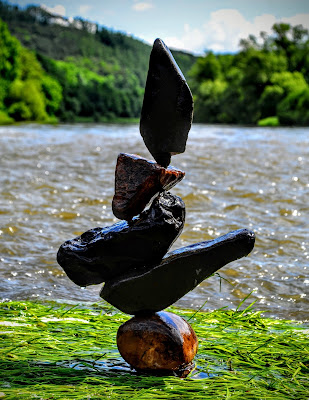 I confess that I do a little bit of rock balancing from time to time. Not for any particularly hippyish reason, other than that it's nice to be outside somewhere peaceful in the natural world; more because it's a fun challenge, not all that different conceptually from a sudoku puzzle or jigsaw - how do I get this rock to balance on top of this one?

(It's also a lot easier than it looks - you'd be surprised how much the friction of the surface of two rocks combined with gravity will allow freakishly unbalanced looking combinations to, well, balance.)

The other day I was stacking some stones at the beach and it occurred to me that it would be a fun idea for a dungeon: perhaps a wizard's tower; perhaps an ancient monument built by an extinct race of giants. Each stone a boulder of epic size, riddle with tunnels and caverns, and each of them having a distinct physical character (as well as a distinct variety of inhabitants: its own types of rock golem; its own types of pech; its own types of earth elemental; its own types of dwarf; its own types of gem dragon, and so on). And, possibly, able to fall over... or be dismantled. 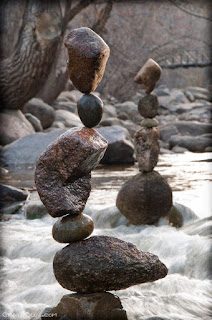 I am a fan of the idea of upwards dungeons. (As is probably evidence by my many posts about the giant tree dungeon, not to mention the Mountain to the Moon.) The descent into hell is fine, but the attempt to climb to heaven seems more human somehow: obviously it has a figuratively optimistic appeal, but it also feels more real - you can see an upwards dungeon, and so George Mallory's reasoning for climbing Everest becomes the perfect justification: why did you want to climb the wizard's tower full of rock golems and gem dragons? Because it's there.
Posted by noisms at 21:49