Are We Stupider or More Discerning?

Layout has moved on a lot. Take a look at these spreads: 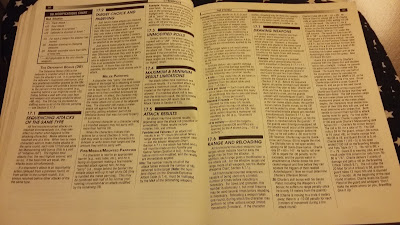 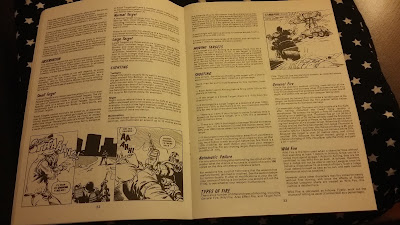 The first is from Cyberspace, the little-mentioned ICE cyberpunk Rolemaster variant from 1989. The second is from Judge Dredd: The Roleplaying Game, from 1985, by Games Workshop (and authored by Rick Priestley and Marc Gascoigne, no less).

Notice anything? Christ, that's a lot of text, isn't it? And, to the modern eye, isn't it presented in an almost aggressively unapproachable way? It's not just boring. It's also unintuitive - to get the hang of the rules you would have to devote careful study, almost as a separate project, making your own notes and staying up all night to revise before each session. They look like law textbooks with a few more interesting pictures.

I got these two games, along with quite a few others, secondhand over the course of a number of years from various physical shops, with the idea of reviewing them for the blog. (These two cost £3 and £5 respectively, since you're asking.) But each time I have sat down to begin this task, I have failed miserably. I just can't be bothered. Whatever initial enthusiasm I have drains out of me like air from a rapidly deflating bouncy castle, leaving me a flacid floppy mound of rubber - the party long gone and not even a doggy bag left.

What's wrong with me? At the age of 14 I would have lapped all this stuff up. The impenetrability wouldn't have bothered me one jot. Partly this is age, and lack of time, and better things to do, and fewer brain cells. But also I think it's because when I was 14 basically all RPG books looked pretty much like this (the text might have had nicer backgrounds in the mid-90s and the internal illos were usually in colour by then, but that's about all that would have changed). And I hadn't experienced "good" information design - I hadn't grown up in a world in which you had to do anything other than just sit down and digest a massive shitload of infodump text if you wanted to know how to play an RPG. I hadn't been molly-coddled, in other words. I was a better and more focused reader.

All of that is to ask: am I just old and stupid now? Or is it the case that getting used to information being presented in an accessible format has made me less able to actually just sit down and do some proper reading and retain the information I've read?
Posted by noisms at 04:05