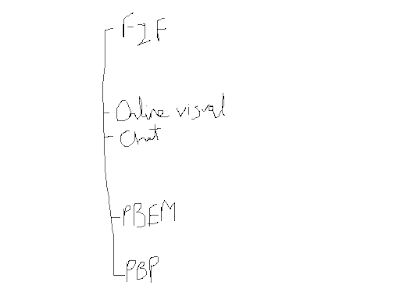 Face to Face play is clearly the superior method for playing RPGs. It is the only mode of play which  provides one of the central, and perhaps the most important, benefits of the hobby, which is that it is social and involves getting together physically with friends. You get to play a fun game and you also get to meet friends, which is important for the soul.

It is also by far and away the most convenient way to play. You get to scribble things on bits of paper to show each other; arrange items on a table to show spatial relationships between in-game objects; crowd together around the rulebook to jointly figure out what a certain passage means, and so on.

Finally, it is thoroughly enjoyable to roll dice when other people are physically present and watching and care about the result. Casinos figured this out a long time ago.

Online visual play is the next best thing, because of course it gets closest to resembling face-to-face play, but it has obvious deficiencies which make it in most respects inferior. Interacting behind a screen is just not as good as interacting in the flesh. (We're all of us now experts in this respect, perhaps unless you're lucky enough to be reading this from Sweden.) Online dice rolling lacks the tension-and-climax of the real thing. Connections drop, or lag, which can get in the way of both the practicalities of running the game and its social lubrication (comic timing, banter, etc.).

Play by chat (meaning playing through text in an IIRC channel or whatever) is close behind, and almost level with, online visual. Play by chat offers, in my experience, a very different feeling to other modes of play. It tends to be very stripped down and focused on what is actually happening and what the PCs are saying and thinking; it is very intense. It feels much less like a group of friends getting together to play a game, and more like a group of gamers who have gotten together to do what they love. There isn't a great deal in the way of joking and extraneous chatter; because it isn't quite taking place in real time, those elements of the social glue get shorn away, leaving just The Game. The fact that all the players are alone and can't see or hear each other also serves to make it highly immersive. I like it.

Play by email (which would also include playing through Messenger, Twitter, Whatsapp or whatever) and play by post (for instance on a forum, blog or whatever) are of course similar. Neither of them are great ways to play RPGs. There is something about being able to make moves or take turns at any time which, perversely, results in less engagement: the discipline of having a regular time slot in which to play makes a big difference in giving a campaign momentum. Interaction of any kind is painfully, glacially slow - whether asking a question of the DM, engaging in in-character dialogue, or just saying what a PC does and getting a response. Combat is painful. If anybody is slow to post, things immediately get bogged down, like being stuck in traffic. With all of that said, play-by-email is far superior to play-by-post. The virtue of play-by-email is that at least everybody passively receives messages in their inbox and can reply to them conveniently. Play-by-post requires them to actually visit a website, which is absolutely fatal to engagement. I have been involved in PBEM campaigns that have lasted years - one of them is still going, and must be 15 years old by now - and I ran one myself which lasted for over two years, with multiple daily posts. PBP, on the other hand, I have never managed to have any success with.

I doubt that my ranking will be controversial, but hey, it beats reading yet another news item about coronavirus.
Posted by noisms at 03:33