I have no idea what Tolkien had in mind for the geography of Rhun and the peoples within it. But it seems to me that, while one shouldn't think of Middle Earth as being too closely paralleled with the real world, there is a case to be made that its character is roughly akin to the Eurasian steppe this side of the Urals - more specifically the Pontic Steppe north of the Black Sea (with the Sea of Rhun here being a bit like the Black Sea). 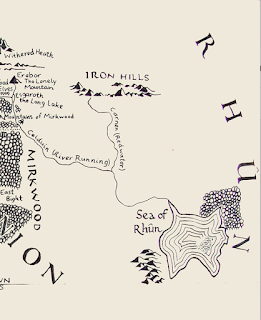 There are a few reasons why I think there are good reasons for drawing some parallels between Middle Earth and the real world, here, again with the proviso in mind that we're not just making one an allegory for the other:


A setting suggests itself in which there is a huge steppe populated by many wandering nomadic (or semi-nomadic, based in sichs) tribes with highly distinctive cultures and languages - perhaps hunting vast herds of the Kine of Araw. But there are also towns proper, home to fallen or debased Numenoreans and their 'Numenoreanised' populations. And there are perhaps, too, the ruins, tombs and monuments of a much more extensive Numenorean realm, now mostly forgotten.

But there are other ingredients too. The agents of Saruman and Sauron are abroad (such a Tolkienesque word), searching for clues about the Blue Wizards and spreading mischief. There are dwarfs living in the hills around the Sea itself - indeed, it is implied that a majority of the dwarves of Middle Earth are actually living in Rhun. Elves too - mysterious and forbidding Avari deep in those forests on the north-east shore of the Sea. And the odd dragon, natch.

What of the Blue Wizards themselves? If we can think of Rhun as the Pontic Steppe, we can think of the Wizards as being beyond it - in Khwarazmia, maybe, or Transoxania - but perhaps that would be to give the game away. In any event, we can be sure that they left "secret cults and 'magic' traditions" behind them as they passed through the steppes of Rhun.
Posted by noisms at 03:56