"What is 'artpunk'?", Patrick S once notoriously asked. I don't wish to pick an argument, especially not 3 years after the fact. But I think we can come up with a better definition.

To me, the suffix "-punk" is hideously overused as a kind of shorthand for "you've seen this kind of setting before, but this is a cool/edgy version of it and the people in it have tattoos and piercings". (I'm not accusing Patrick of using it in that sense - just the people who come up with ridiculous neologisms like "islandpunk", "lunarpunk" and "mythpunk".)

What -punk, in the sense of cyberpunk, steampunk, dieselpunk, etc., really means - if it is to have any coherent, sensible meaning - is that the fiction is about the alienation from, and subversion of, the particular technology in question. Think of William Gibson's cyberpunk stories: these were tales about the have-nots - the people who had been dispossessed by advancing technology, the preserve of the haves - and their attempts to deploy that technology in illicit or unusual ways for the furtherance of their own agendas. It was not so much an aesthetic as it was a viewpoint (the future from the "belly up", as Bruce Sterling put it in his famous introduction to Burning Chrome). You might call it the use of the thing against itself.

Hence, a genuine steampunk setting is one in which steam technology has made a small percentage of the population very rich, but the fiction is about criminals, crooks, ne'er do wells, and rogues who cunningly deploy (or abuse) the technology to grab some of the 1%'s wealth for themselves.

What, then, is artpunk? Well, there is a lot of good art and layout around nowadays, even within so-called DIY D&D  - stuff that makes its creators comparatively large sums of money on big scale Kickstarters, and is expensive to consume. Think of that as a technological development in the sphere of art. If that is the case, then what is artpunk if not the subversion of that mainstream, glitzy, expensive-looking aesthetic - a deliberate eschewment of accepted artistic standards as a rebellious aesthetic choice of its own?

Seen in that way, Patrick and Scrap's stuff is probably the epitome of artpunk: it is art produced with exceptional skill and talent (in my view) but which goes out of its way to avoid looking pricey. At the same time, so are the entries to Prince of Nothing's "No Artpunk" contest, Mike's Dungeons and rather a lot of the things reviewed on tenfootpole: work by the artistic have-nots, who nonetheless are attempting to do interesting and perhaps deeply unartistic things with the art contained in their output.

In a funny sort of a way, the images in OD&D themselves bore the seeds of artpunk - protoartpunk, if you will. These are not the product of the artistic "haves". This is the work of the artistic "have-nots" who are going to have a piece of the action anyway. Now that's punk. 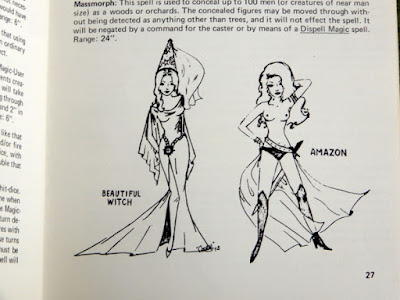