Keying a Megadungeon; Or - The Microsoft Office Approach

Writing up the first level of my tree-trunk megadungeon for my art competition winners, I hit upon the idea of using Excel as a megadungeon key. Viz [DON'T LOOK AT THIS IF YOU ARE A PLAYER IN MY GAME AND DON'T WANT SPOILERS]: 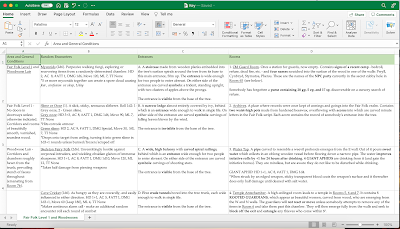 Hence, each sheet within the Excel file is a level of a dungeon (in this case, the only sheet visible is 'Fair Folk Level 1/Woodwoses'), divided into four columns.

The first column (the only one that I find slightly awkward/ungraceful) is a description of general conditions in the level.

The second is the random encounter table (using 2d6, natch).

The third logs the different entrances.

The fourth is the key itself.

You could easily bundle this with PowerPoint slide maps (or even more Excel spreadsheets) in a .zip file so as to contain an entire megadungeon, downloadable on itch.io.